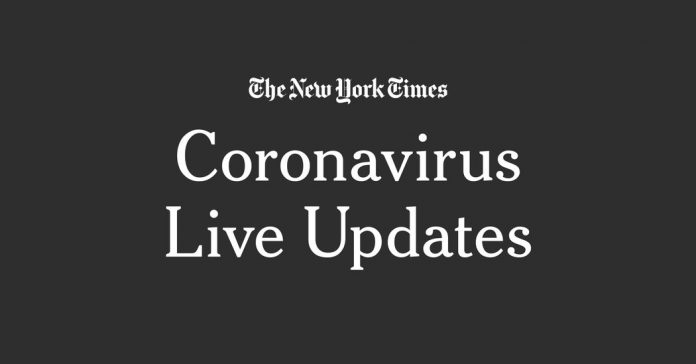 After Florida reported a record 132 deaths on Tuesday, a group of mayors from Miami-Dade County, the center of the state’s crisis, warned Gov. Ron DeSantis, a Republican, that local officials are running out of time to avoid another painful economic closure.

“There is a significant amount of pressure for us to shut down,” Mayor Francis Suarez of Miami told Mr. DeSantis at an event in the city. “We have between one week and four weeks to get this thing under control, or we will have to take some aggressive measures.”

The mayors took issue with messaging about the pandemic, which has been confusing and inconsistent, from President Trump on down, they said. Mr. DeSantis, who notably wore a mask while speaking indoors, tried to acknowledge how difficult the pandemic has been for Floridians, adding that “people are apprehensive.”

“We have to have a greater sense of urgency,” said Mayor Dan Gelber of Miami Beach, who told the governor point-blank that he should endorse a mask order.

It was an unusual public chiding — though delivered with a light touch — for Mr. DeSantis. The death record in Florida comes as the number of U.S. deaths has begun to rise again after weeks of declines. Single-day death records were also set on Tuesday in Alabama, which reported 40, and Utah, which recorded 10. Oregon matched its daily death record set on April 28 with 7 deaths.

The nation was averaging 724 deaths a day as of Monday, up from below 500 a day as July began. While deaths are up, they remain far below the more than 2,200 deaths recorded each day during the deadliest phase of the outbreak in April. But 23 states are reporting more deaths each day than they were two weeks ago, according to a Times database.

Farther north in the state, Republican officials are planning to move the three nights of their national convention in Jacksonville from an indoor arena to an outdoor venue, Maggie Haberman reports. It’s still unclear how many people will be allowed to attend the events, people familiar with the discussions said Tuesday.