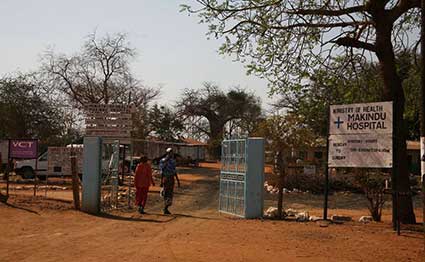 By PIUS MAUNDU
More by this Author

Tension is high in Makindu township, Makueni County where two people suspected to have coronavirus were isolated on Wednesday night.

A truck driver and his turnboy who came from Tororo in Uganda were ordered to walk into Makindu Sub-county Hospital, while escorted by medics, where they were immediately isolated.

A hospital source told the Nation that one of the two had tested positive for Covid-19.

Police are said to have tracked the movement of the truck driver and forced him to park and head to the hospital.

“The two had been screened for Covid-19 at the Malaba border as they entered Uganda on Sunday. They were screened again as they left Uganda the following day,” a police source in Makueni who is privy to the incident told the Nation.

“The other one is therefore highly exposed to the virus,” a medic privy to the matter told the Nation in confidence.

Police sources indicate that his results came late while they were already in transit.

“As they drove towards Mombasa on Wednesday night, authorities called and ordered them to walk to the nearest hospital. An alert on the truck in question was also circulated to police stations along the Mombasa-Nairobi highway,” he added.

Armed police officers are guarding the truck which is parked at a busy petrol station in the town.

It has also emerged that the two had interacted with multiple traders at Salgaa and Emali townships where they had stopped.

The State is now racing to trace all contacts that interacted with the duo.

Attendants at the petrol station were among those questioned by the police.

“They wanted to know if we took any cash from the two,” one told the Nation after a meeting with detectives.

Makueni County Commissioner Mohammed Maalim told reporters that the matter had been escalated to the national team coordinating the fight against coronavirus.

He declined to divulge more on the matter, saying the mandate falls squarely with Health Cabinet Secretary Mutahi Kagwe.