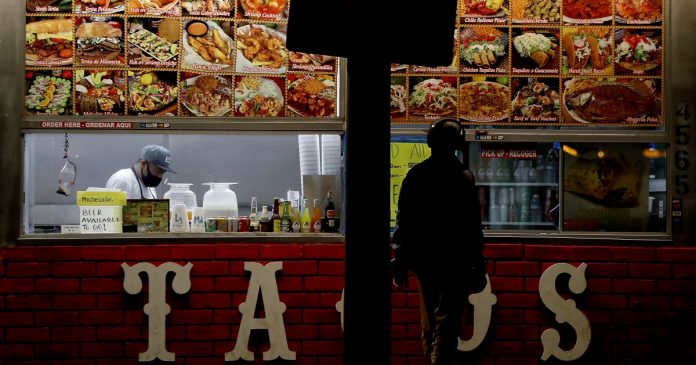 California restaurants might soon be able to reopen their dining rooms in counties that have seen reduced cases of the novel coronavirus, provided they follow a list of guidelines for physical distancing and cleaning regimens, Gov. Gavin Newsom said Tuesday.

The announcement came as the state released a detailed plan outlining “guidance for dine-in restaurants, brewpubs, craft distilleries, breweries, bars, pubs, and wineries,” including the use of face masks by employees, enhanced sanitary procedures, disposable menus, increased fresh air circulation, the elimination of tableside or cart service and the limiting of dining room seating to allow for physical distancing.

But even as the state is moving forward with those plans, restaurants in L.A. County will likely be forced to remain on the sidelines for many more weeks.

On the same day, L.A. County Public Health Director Barbara Ferrer warned that the county will most likely extend stay-at-home orders in some capacity for three additional months. She didn’t address the fate of dining rooms specifically, but it’s unlikely that the businesses would be exempt from an extended order.

The lack of clarity as to when and how restaurants in L.A. will be able to return to “a new normal,” as Newsom put it, has many owners and employees preparing for the worst.

“To be honest with you, it’s very difficult. It’s not worth it for me to come to work every day — some days we don’t have any customers,” said Mike Bastani, manager of Attari Sandwich Shop in Westwood.

“Even when [restaurants] do open up, do you know how difficult it’s going to be? We just go with what they tell us, we just put on our masks. I don’t know what to do.”

Lilly Cacchione, owner of Hard Times Pizza in Echo Park and Amarone in West Hollywood, said she was looking forward to the day L.A. County restaurants reopen for dine-in, but doesn’t have any illusions that things will immediately go back to the way they were.

“I understand that normal, as it was a couple months ago, is not gonna happen,” she said.

Requiring all staff to wear personal protective gear in the kitchen, she said, presents a challenge. Cacchione works the pizza ovens at Hard Times herself and has breathing issues.

“To wear a mask and gloves is very hard to do,” she said. “I think they themselves cannot do what they’re asking people to do. It’s not like a two-hour period; it’s like eight hours.”

While takeout and delivery have allowed Hard Times Pizza to stay afloat, things aren’t going as well at her upscale Italian restaurant, Amarone. “I’m surviving here,” she said of the pizzeria. “At the other one [Amarone], 80% has been lost for us.”

Given the high cost of implementing the state’s new guidelines, some restaurant owners are considering doing away with seated dining altogether, at least for the foreseeable future.

“If they’re going to be so draconian, we’ll just keep doing takeout,” said Michael Osborn, owner of Pie ’n’ Burger in Pasadena. “The government has picked winners and losers in this. We’ll survive as a business, I know that. I bought the pickup truck when I wanted to buy the Ferrari 10 years ago, and put it away for a rainy day. It’s certainly raining now.”

Osborn said he owns the property that Pie ’n’ Burger sits on and has some money saved, two advantages most restaurants don’t have. Still, the cost of the prime beef he buys for the restaurant has nearly doubled, and he’s not sure when sales will pick back up.

“I could get through this year,” he said. “But are the goal posts going to be moved again? Most of the variables are out of my control.”

At Art’s Deli in Studio City, owner Harold Ginsburg (Art was his father) said he would take a “wait and see” approach once it came time to reopen his deli’s dining room.

In his Tuesday press conference, Newsom acknowledged the severe economic challenges facing the hospitality industry, which employs more than 800,000 people in Los Angeles and Orange counties.

“You’re already running on low margins to begin with. I’m not naive about any of this,” he said. “I’m deeply concerned.”

Ulmer: The daily life of a semi-truck driver | Columnists