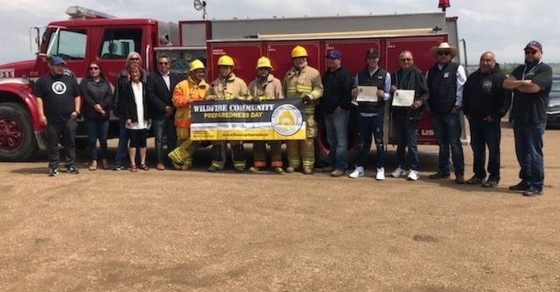 Recently Cote First Nation (FN) became the first Saskatchewan FN to be given an award in a national competition for an award in regards to being a Firesmart community.

On June 8, Chief George Cote accepted the award and a cheque for $500, along with congratulations for the Cote Volunteer Fire Department for having won the Wildfire Community Preparedness Award.

“This is a national program, so for Cote FN to be acknowledged with this award is an honour,” said Bonnie Austman ERPC (Emergency Response Planning Co-ordinator) for the Yorkton Tribal Council (YTC). “Earlier this year I submitted names of our members to a national competition for an award in regards to being a Firesmart community.

“Cote First Nation has won this award which included a $500 cheque to go toward their community FireSmart program, gloves, t-shirts and a banner of recognition,” she said. “This was a very exciting win for Cote FN Fire to be honoured for the hard work they have done, to reduce the risk of wildfires in their community.

The Cote Fire Department has one pumper truck, a 4 x 4 all terrain vehicle (ATV) and an additional truck and trailer to transport rescue tools. As of yet, there in no fire hall on the FN. It is equipped to provide mutual aid to area fire departments.

“FireSmart is an organization that assists communities, does training in regards to how to keep your community safe by cleaning up your yards, moving any debris, moving trees back from your houses, your structures, and also assisting the fire departments in wildfire preparedness training.” explained Austman of what FireSmart Canada is all about. She noted the First Nation made rapid improvements over the last little while to earn the award.

“The Fire Department which has eight members has two people that are trained in FireSmart, they have a fire truck that’s up and running, they’ve managed to get wildfire gear and turnout gear from our First Nations Emergency Management and they did a community cleanup day,” Austman said.

FireSmart Canada and its partners are committed to safety from wildfire, but we are also concerned about your personal, family and community health and safety.

Wildfire Community Preparedness Day is a program designed to support communities across Canada with holding FireSmart events to proactively address wildfire issues at a local level.

More information may be found on the Internet at https://firesmartcanada.ca/.