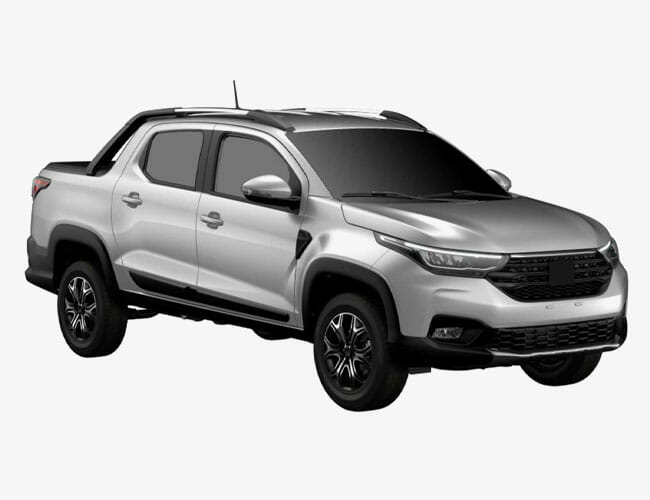 The market for smaller pickups has been booming in recent years. Chevy reentered it a few years ago with the Colorado, then Ford retaliated by bringing back the Ranger. Ram, though, has been a noteworthy exception. The brand has not offered a smaller alternative to the Ram 1500 since discontinuing the Dakota in 2011, even though there’s a clear white space in the market.

Which begs us to wonder: could Ram’s eventual retort — which, based on recent legal documents, could well go by “Dakota” once again — be this tiny Fiat pickup with a different badge?

Recently, Motor 1 found the Brazilian design filing for the new Fiat Strada. The small unibody pickup is moving to a four-door body style; it looks decidedly more truck-like than its predecessor, and even vaguely resembles Hyundai’s new affordable compact crossover truck launching in 2021. (Ford plans to dip its toes into that market, too.)

Why use the Strada? It would save on costs over building a new truck from scratch. Ram has already made a similar move with its ProMaster van, a rebadged Fiat Ducato. FCA — a noted efficiency laggard  — could use a more efficient unibody truck to meet new emissions standards, though the Strada would still likely need a more powerful engine than the ones offered overseas to compete in the American market (albeit probably not a Hemi).

Creating a body-on-frame mid-size truck for Ram would be an uphill battle. After all, competitors like the Toyota Tacoma, the Colorado, the Ranger, the Honda Ridgeline and FCA’s own Jeep Gladiator already saturate the market. A unibody compact truck, though, would have less competition, and could also be even cheaper while not cannibalizing Gladiator sales.  Besides, if Americans stop spending so much on new cars in a more uncertain economy, a more efficient and super-affordable truck option could be a great play.

These Were The First Production Cars From American Car Brands

Ontario moves ahead with rules to keep protesters away from trucks...