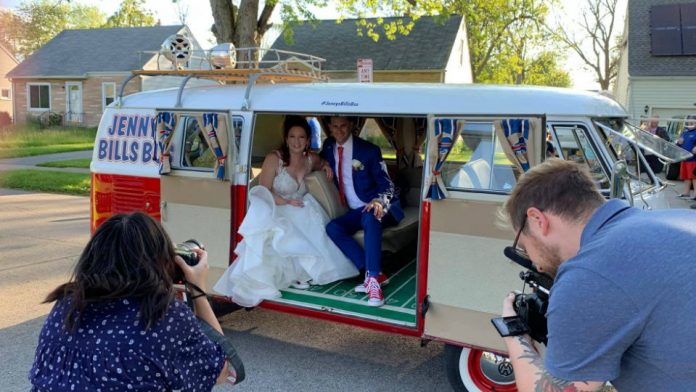 It’s no secret that people in Western New York love the Bills. One couple took that love to the next level by getting married in front of New Era Field.

Celeste Cline said she messaged her future husband online after seeing all the Bills-related memorabilia on his profile.

“…I would meet guys and I would be like, my Thursdays, Mondays and Sundays are busy during football season. If you don’t understand that, it’s not going to work,” said Celeste.

Mike Cline said any good event needs a theme, and what better theme than the Bills?

Mike and Celeste knew that they wanted to have a Bills-themed wedding and get married on June 12th, Celeste’s late mother’s birthday. Pulling everything together wasn’t easy during a pandemic.

Since they couldn’t get married in the stadium on their desired date, they asked the owner of the Bills Mafia House if they could hold the ceremony in his backyard and still have the New Era in the background.

“That part was easy. Everything else over the past two months was me scrambling to try to make the most of the day as possible. Up until two weeks ago, we didn’t know how many people we could have,” says Celeste Cline.

The festivities followed social distancing guidelines and included a parade, the Buffalo Brew Bus, and an ice cream truck. The ceremony was followed by a small, intimate reception at the couple’s patio, which was of course fully decked out in Bills gear.

“It’s something that everyone here can connect over, especially the people our age who can remember the 90s when they were really good. And it really brings everybody together. And so does a wedding… We received a signed picture from Darryl Talley. His wife sent us that. Brian Daboll found me on Twitter and sent me a message to congratulate us, so that was really cool,” says Celeste.

This couple says that jumping through so many hoops to be able to get married in front of New Era Field during the pandemic was worth it.