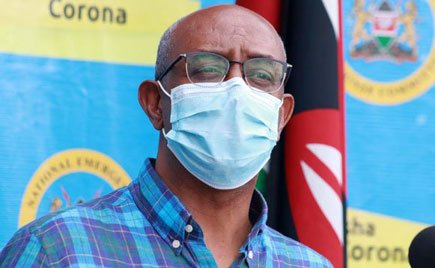 The new cases include 10 from Mombasa County, 9 from Kajiado, 7 in Nairobi and 2 from Wajir. He said all the cases in Kajiado were truck drivers tested at the Namanga border point with Tanzania.

One more patient died in Nairobi bringing total deaths to 33, while 251 have recovered from the virus.

Dr Aman also noted that it was day 60 since Kenya confirmed its first Covid-19 case.

He noted that testing capacity had grown, but was sometimes limited by availability of reagents, which he noted is a global problem caused by increase in demand.

On his part, Health Director General (DG) Patrick Amoth said those seeking admission in hospital will soon require Covid-19 testing after noting that patients and health workers were being put at risk.

“When people die at hospital they risk infecting health workers and patients at the wards who have a weak immune systems. Admission at a facility may soon require testing so that health care providers are protected,” he said on Monday.

Dr Aman noted that all of the Kajiado cases from the last 24 hours were from truck drivers at the Namanga border point. He said that this development pointed to the fact that there was a problem in neighbouring Tanzania.

He also raised the red flag over border crossing by members of communities living in counties such as Wajir and Mandera that are close to Somalia.

“We have noted especially at the border increasing number of positive cases…The communities living along porous borders are urged to be vigilant and report when they see people crossing from the other side so they can be tested.”

Tourism CS Najib Balala, who was present at Monday’s briefing, said it’s the responsibility of every restaurant in the country to follow Covid-19 protocols issued by the government.

He added that eateries and restaurants will be required to pay for Covid-19 testing at Sh1,000, down from Sh4,000 after the State subsidised the cost.

National Appeal Info – A Good News Story For The Nation