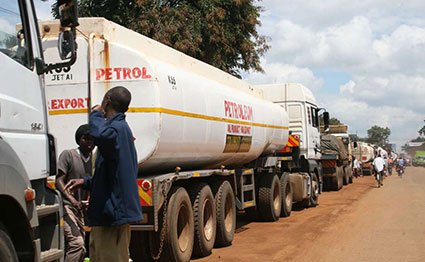 By DAILY MONITOR
More by this Author

Kenyan truck drivers and transport companies have protested a decision by the Ugandan government to stop them at entry points and make them hand over to Ugandan drivers.

The proposal will see Ugandan drivers deliver the cargo to its final destination within the country or hand it over to another driver in case the truck is still on transit.

On Friday, Ms Robinah Nabbanja, the State minister for Health in charge of general duties, said the Ugandan government had asked companies to recruit local drivers within three weeks to implement the new directives.

“They can have a chance to recruit Ugandan drivers and other country drivers because they (companies) had one, two or three drivers…..our policy now requires that when you come to the border, the vehicle continues with another driver,” she said.

However, members of a Kenyan transporters association have protested the decision saying it will raise the cost of transporting goods. They have also said that the security of goods and trucks will be compromised.

“This would drastically increase the cost of transportation to the trucking companies while the business has been affected due to reduced cargo volumes and longer transit times. Transporters would also incur additional expenses in providing accommodation for additional drivers,” a petition signed by Ms Mercy Ireri, the chief operating officer of Kenya Transporters Association reads.

Ms Ireri said they have instructed their members to adhere to all regulations enacted by regional governments in the fight against the coronavirus by providing face masks to the truck drivers, sanitisers, handwashing soap and water as they travel.

She said the security and safety of the cargo would be compromised by using multiple drivers in a single haulage.

Ms Ireri added that the changeover of drivers would create inefficiencies and that truckers would face challenges in tracing drivers’ responsibilities on truck misuse, damages and theft of fuel.

She also said the relay driving would raise insurance challenges as any accident or theft would likely be challenged by the insuring companies.

Uganda is yet respond to the petition.

Attempts to get a clarification from Trade Minister Amelia Kyambadde on how her ministry will respond to the petition were not successful.

Gen Jeje Odongo, the Minister for Internal Affairs, and Gen Katumba Wamala, the Works minister, did not respond to repeated calls from the Daily Monitor.

The Kenyan truckers association has proposed that drivers undergo mandatory Covid-19 tests at the border.

According to the proposal, if a driver is found to be Covid-19 negative, he or she should be allowed to proceed with the trip to its destination while those who test positive should be put in isolation in accordance to the World Health Organisation regulations. The transporting company should be informed to make arrangements for another driver to proceed with the journey after undergoing Covid-19 testing.

7 Classic Pickups That Have No Place On The Road (And...