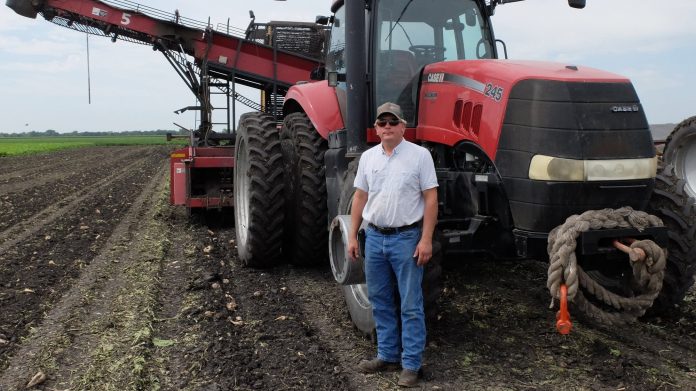 The sugarbeet harvest is all about timing.

The beets can’t be stockpiled when temperatures are warm, or they spoil. But they have to be harvested before the ground freezes.

So in September, farmers in northwest Minnesota and eastern North Dakota have to harvest just enough to keep five sugar-making factories in the Red River Valley running.

Then, in early October, when it’s cold enough to stockpile the beets for processing through the winter, the harvest shifts into high gear.

When that happens, workers come from across the country to help to bring in the haul. Weather is typically the biggest harvest concern — last year, a wet fall and an early winter brought the process to a sputtering halt. But this year, COVID-19 has everyone, from farmers to processors, nervous.

Neil Rockstad, who farms near Ada, Minn., hires eight employees to drive tractors and trucks for the harvest. He’s just one of hundreds of sugarbeet growers in the Red River Valley looking for workers. His harvest has already begun.

Rockstad said it’s been a bit harder than usual this year to find workers.

“I think there are some people that are cautious about working harvest as they have in the past just because of the threat of COVID or the risk of infection,” he said.

Rockstad is also president of the Red River Valley Sugarbeet Growers Association, the 2,800 growers that own the American Crystal Sugar Cooperative, the largest beet sugar producer in the country.

The association doesn’t track how many workers are hired by farmers, said executive director Harrison Weber. But he estimates farmers need more than 4,000 people to bring in the crop when the full-scale harvest starts in October.

But this year, there will also be an emphasis on washing hands and sanitizing truck and tractor cabs.

And when truckloads of beets are hauled to the factory, or to one of 36 sites where they are stockpiled, masks are required anytime the truck windows are opened.

Each time a loaded truck arrives, it’s weighed to track the harvest. In the past, the scale operator and truck driver would exchange paper tickets. This year, the driver will hold up a bar code to be scanned at a distance.

And there’s another ritual on hold this year.

“No handing coffee through the scale house window — which was kind of a kind of a nice convenience for our guys,” said Rockstad. “That just won’t happen this year.”

Rockstad doesn’t house workers on his farm, but  Dan Younggren does.

Younggren farms near the Canadian border, and he’ll hire about a dozen workers for harvest from places like Duluth, Grand Rapids and as far away as Colorado. About half will stay in a bunkhouse his family maintains on the farm.

“We’ve got things ready to go. We’ve got enough spaces in rooms for everybody to have their own bedroom,” said Younggren.

The workers will share a bathroom, a kitchen and a common area. Social distancing will be strongly encouraged. There will be no group meals. Workers will eat in their trucks. Truck cabs will be sanitized between shifts.

Younggren will lay out his expectations for workers, but he won’t have time to monitor their behavior. He’s hoping everyone follows the rules.

“At the end of the day, you know what, we’re all grownups here. We have to have some accountability on our own,” he said.

There have only been a handful of COVID-19 cases in Kittson County, where Younggren farms, so he thinks the risk to his workers is relatively low, assuming they don’t bring the virus with them.

On the receiving side of the harvest, American Crystal Sugar Co. will have nearly 2,000 workers running five sugar-making factories, which typically process beets from September until May.

The company will be checking temperatures and requiring masks. In areas where workers have to be in close contact, plexiglass dividers have been installed. Plans for rapid contact tracing are in place for when workers get sick.

Starting in October, nearly 1,500 temporary workers will also be working the 36 sites where beets are stockpiled 24 hours a day until the harvest is completed. The goal is to finish the harvest in two weeks. Hundreds of those workers come from across the country every year, many living in campers they park in small towns across the region.

“The vast majority are still planning to come up,” said Vice President for Agriculture Brian Ingulsrud, and American Crystal is already letting those workers know about the coronavirus safety measures that will be in place.

“So that they feel safe when they’re driving up here with their campers, that they’re going to be taken care of,” said Ingulsrud.

Ingulsrud is confident the company is taking the appropriate proactive measures to mitigate the coronavirus impact on factory operations.

“Those are things you can control while people are on the job. You really can’t control what happens when people leave the job. And that makes me nervous,” he said.

Last year, wet weather shut down the harvest before it was complete, leaving about a third of the crop to rot in the ground.

Weather is a concern again this year, as usual, with already wet conditions in some areas, but  Neil Rockstad is also nervous about the additional uncertainty COVID-19 brings.

“If it did happen to get through a farm operation, it could shut down the entire farm operation and you could risk not being able to harvest because of a disease,” said Rockstad.

And he’s not sure what Plan B might look like if there’s an outbreak among his workers.

“Chances are, you’ll be relying on your neighbors. If somebody in the neighborhood has a harvest crew that comes down ill, they’ll probably get help from their neighbors at the end to finish things up, and that’s probably the backup plan,” he said.

The plans — and backup plans — are likely to be tested when full-scale harvest begins Oct. 1. Ingulsrud hopes the virus control efforts will be fine-tuned by then.

“We’ve got a great business, but unless we have beets harvested to process, we don’t have anything, and so we’ve got to make sure that we’ve got people [to work] and give them assurances that we will keep them healthy,” he said.

Comprehensive Analysis of 210 Top Companies Including Kuhmo Tire Co. and...

Suspect shot and killed by deputies