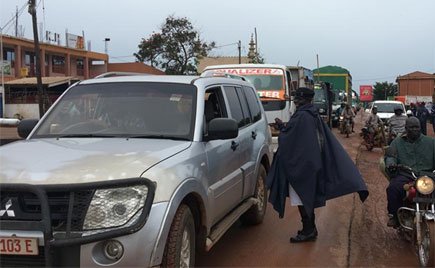 A Tanzanian cargo truck driver who tested positive for covid-19 will be repatriated to his home country to receive treatment, according to Ms Robinah Nabbanja, the State Minister of Health in charge of general duties.

Dr Edward Muwanga, the Kyotera District health officer said that the driver’s nasal swab sample was taken on arrival at the border and was allowed to drive on on Thursday

“When the results returned on Friday and it was confirmed that he is positive, we used the established channels to trace him and he was intercepted in Kiryandogo District,” he said.

Dr Muwanga said that they are tracing all his contracts to have them tested.

This follows intensified effort by health teams in Kyotera District together with Ministry of Health staff to test the truckers in order to curb the spread of covid-19 in Uganda.

So far, the teams have drawn nasal swab samples from 130 truck drivers and their turn boys who enter the country through Mutukula Border Post, to curb the spread of the coronavirus virus.

Tanzania on Friday recorded 53 new coronavirus infections bringing the total number of patients in the country to 147.

By Thursday (April 16), Uganda’s Ministry of Health had reported 55 cases since the outbreak of the pandemic.

Initially, the health workers were only measuring body temperature of the truckers until they spotted a positive case among the driver on Thursday at the Kenya –Uganda border post in Malaba town.

After taking his sample, the 27-year old trucker from Kenya was allowed to proceed with his journey to Juba, South Sudan and was intercepted at Kamdini in Oyam District and taken to Kampala for treatment.

The victim had reportedly interacted with several people in nine districts where he passed.

According to Col. Milton Rahuka, the Uganda Revenue Authority South western regional customs manager, after taking their samples, the truckers  are monitored electronically and if one tests positive, they can easily be traced along the way .

“We have also instituted a team that guides the [truckers] on how to avoid interacting with the community before results are brought back from Uganda Virus Research Institute. Still, since there’s a lockdown, we don’t expect them to go to bars, hotels or lodges where they could have interacted with others,” he said on Friday.

Dr Muwanga, said that if some of truckers are suspected to be positive, especially those with a high body temperatures, they are quarantined at Kalisizo General Hospital where an isolation centre has been set up.

“We quarantine the suspects at Kalisizo and so far, two have been identified. We are also in touch with Masaka Regional Referral   hospital management in case we get cases we cannot handle,” he said.

Mr  Rahuka said there’s a heavy deployment of both soldiers  and police officers at the border to block all people  who  may sneak into the country  from Tanzania and other countries like Rwanda.

Meanwhile, a combined force of soldiers and police officers in Kyotera Town closed some shops where attendants had pretended to be operating mobile money outlets yet they were selling mobile phone accessories.

According to Mr David Matovu, the Kyotera Resident District Commissioner, the attendants were cautioned and ordered not to open the shops until the lockdown is lifted.