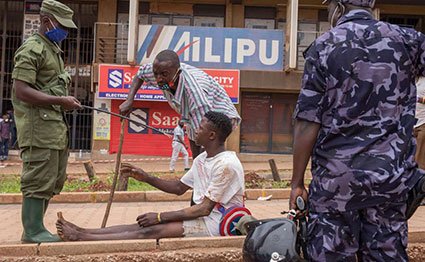 By DAILY MONITOR
More by this Author

The Ugandan Cabinet has agreed to lift in a phased manner the lockdown which started on April 1 and which is aimed at containing the spread of the coronavirus pandemic.

In a meeting chaired by President Yoweri Museveni on Tuesday, the Cabinet agreed that each sector of government will develop a plan for the phased reopening of the country.

A source who attended the meeting said President Museveni tasked the ministers to present the sector plans at a special Cabinet meeting on May 2 which will review them and decide on the phased implementation when the current lockdown ends on May 5.

In an effort to tackle the spread of the coronavirus into the country from neighbouring states, the Cabinet ministers reportedly agreed that each truck will be allowed to have only a driver and he or she will be tested at the border before entering the country.

Nearly all the new cases of Covid-19 cases in the last two weeks have been cargo truck drivers bringing in essential commodities from Kenya and Tanzania.

Kenya has announced that it has started massive testing of all truck drivers to ensure that they do not spread the virus to different parts of their country and the region.

Another source said the Ugandan Cabinet agreed to concentrate its efforts at the borderline where they will heavily deploy security officers to ensure no one enters the country without undergoing testing and being quarantined.

Truck drivers are among the few workers who were allowed to continue working during the lockdown as they are considered essential to the survival of the economy.

A foreign transport company whose trucks enter Uganda must have a specific driver who will drive it in the country upon reaching the border.

However, the borders will remain closed to non-cargo traffic until the coronavirus is defeated in Uganda and in the neighbouring countries.

All people arriving from abroad were subjected to 14-day quarantine and could only be released if they tested negative to the coronavirus.

Following the first Covid-19 case recorded on March 21, the airport and all borders were on March 22 closed to passenger traffic except cargo.

The president on March 27 suspended public transport for 14 days. This was later followed by suspension of private transport, only allowing cargo trucks and essential delivery vehicles to continue operating.

On March 30, a curfew was imposed and a total lockdown declared for 14 days.

The lockdown was extended for another three weeks up to May 5.