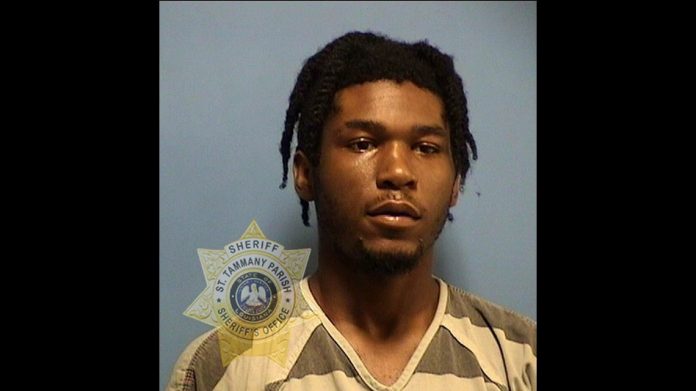 A bullet shot through the truck’s rear window and through the passenger-seat headrest. The bullet hit the front windshield before falling back onto the dashboard.

COVINGTON, La. — A Covington man was arrested last month for shooting a bullet that hit an occupied St. Tammany Parish Sheriff’s Office vehicle more than half a mile away.

According to information released by the department, a sergeant with the STPSO was sitting in his car around 9:50 p.m. on May 25, parked outside a sheriff’s office building on Champagne Street in Covington, when a bullet shot through the truck’s rear window and through the passenger-seat headrest.

The bullet hit the front windshield before falling back onto the dashboard.

The next day, STPSO detectives investigating the shooting served a search warrant to a home on East Sharp Road in Covington, where drugs and an AK47 were found. Adrian Chatman, 21, was arrested and reportedly admitted to detectives that he had fired the gun 17 times from the intersection of Taylor Street and 31st Street, about 0.7 miles away.

Investigators believed one of the bullets from his gun hit the sergeant’s car, reportedly nearly striking him. They sent it to the Jefferson Parish Crime Lab for ballistics testing and instead arrested Chatman on other charges.

But after he was released, ballistic results from the gun came back, showing the gun was the one that fired the bullet that hit the sergeant’s car. They also connected the gun to two attempted murders: one in Tangipahoa Parish and one in Covington.

Chatman was booked again on June 5, this time on a charge of aggravated criminal damage (for the damage to the STPSO vehicle).

STPSO officials did not say if he would be charged in connection to the two attempted murders.

RELATED: ‘He is going to change the world’: Funeral held for George Floyd

Do Soldiers Dream Of Electric Trucks?