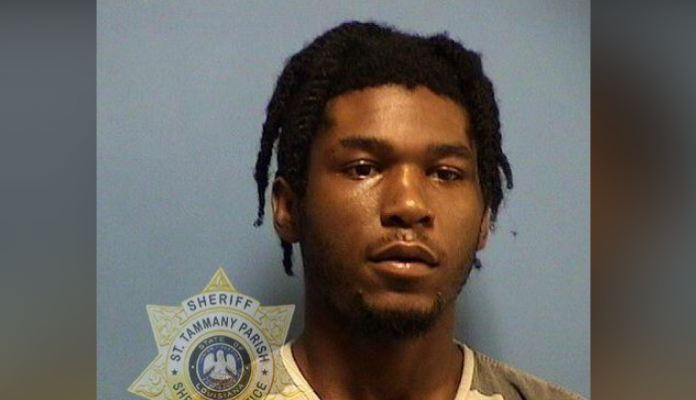 A Covington man who allegedly fired a semi-automatic weapon 17 times and struck a marked St. Tammany Parish Sheriff’s Office patrol truck while a deputy was inside has been arrested, the Sheriff’s Office said Tuesday.

The shooting happened at about about 9:50 p.m. on Memorial Day, while the vehicle was parked outside a Sheriff’s Office building on Champagne Street in Covington, a news release said.

A bullet went in the rear window, passed through the passenger seat headrest and narrowly missed the sergeant, who was sitting in the driver’s seat, before striking the windshield and landing on the dashboard, the Sheriff’s Office said.

Two men face criminal counts in connection with the April burglary of a gun store in the Covington area, according to the St. Tammany Parish S…

Detectives investigating the shooting confiscated narcotics and an AK47 pistol while searching a home on East Sharp Road in Covington. Adrian Chatman, 21, admitted that he had fired the weapon 17 times that night from the intersection of Taylor Street and 31st Street in Covington, the news release said.

The pistol found in his possession was sent to the Jefferson Parish Sheriff’s Office Crime Lab for ballistics testing, according to the news release, and the results confirmed that the bullet that struck the Sheriff’s Office truck was fired by that weapon. Detectives arrested Chatman again on June 5, and he was booked with aggravated criminal damage.

The firearm has been connected to two attempted murders, one in Tangipahoa Parish and one in Covington, the Sheriff’s Office said.

The FBI and Covington Police Department assisted the Sheriff’s Office in the investigation.