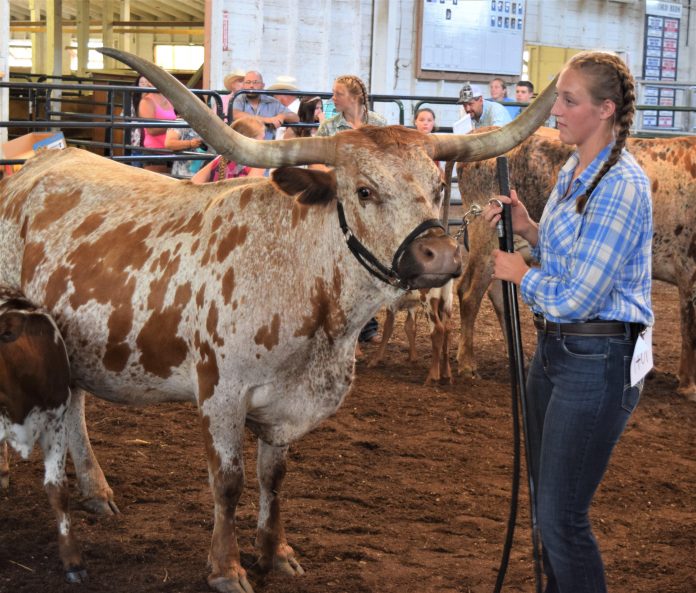 WOOSTER — It appeared as though a fair might be going on as the Wayne County Fairgrounds were abustle this weekend with a variety of events taking place on the grounds.

Also taking place at the fairgrounds this weekend was the Ohio Pygmy Goat Association show, which drew around 350 goats for the competition, and the Wayne County Association Truck and Tractor pull.

Amber Dunmire of Coshocton serves as president of the Ohio River Valley Texas Longhorn Association (ORVTLA).She explained that the longhorn shows are similar to showing animals at fairs, as the contestants march their animal into the arena where they are reviewed by a judge and plaques and ribbons are awarded.

The judge for this event was Danielle Mershon, a member of the International Texas Longhorn Association, which promotes the development and registration of longhorn cattle and improving the cattle industry through education, preservation and establishing breed standards.

In her evaluation of the cattle, she looked for balance and strength, as well as appearance and temperament. She often commented on the horns, and how the animal carried itself. Color was another consideration.

Jocelynn Woods, a junior at West Branch High School, who showed the champion in the haltered class, said that she has been showing her heifer Candy Cane Crystal for about nine years.

“I like to think we have an established relationship with them just from working with them. I give her a little pep talk before we go into the show ring,” Woods said. “Overall, she’s just a great cow. She’s 11 and I’ve worked with her since she was a calf. We have a really good chemistry.”

Woods’ father, Luke Merrick of Homeworth, OH, noted that having a kid that is dedicated to working with the animal helps, along with having a colorful, good looking animal. He said they are gentle, docile animals that are easy to maintain.

The event was closed to the public this year due to Covid-19. The show was open to friends, family and Texas Longhorn cattle.

Dunmire said the exhibitors make the shows. This was the second year in a row they had more than 100 head of cattle for the event.

On Friday, they held the futurity (cattle under three years old) and youth shows, and Saturday featured haltered and non-haltered categories of bulls and heifers of different ages.

ORVTLA is a non-profit organization to preserve and promote the Texas Longhorn breed of cattle, and to provide for fellowship among our members, through sales, shows and field days.

The Truck and Tractor show had 11 different tractor categories and four truck classes. The final event of the evening was the street stock semis. It was the rescheduled soring event.

Planes grounded by COVID-19 kept in tip-top shape at Changi –...

Back from Boot Camp: Mitsubishi unleashes the new Strada Athlete