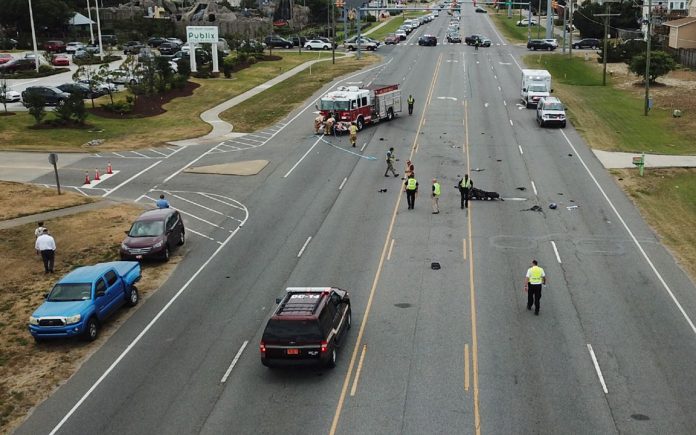 The Kill Devil Hills Police Department has reported that on Friday, July 24, 2020 at approximately 2:24 p.m., a collision between a Honda motorcycle and Toyota pickup truck resulted in serious injuries as well as the closing of all lanes of US 158 for approximately 35 minutes.

The collision occurred on US 158 just south of First Street near Publix.

According to KDHPD, the investigation into the cause of the wreck determined that the motorcycle rider, Nathan Jones, 31, of Holtwood, Penn. was driving unlawfully and at a high rate of speed between the two lanes of southbound traffic on US 158. “The rider was unable to see or did not stop in time to avoid a rear end collision with the Toyota pickup truck,” stated a report on the incident.

The motorcycle rider was ejected from the bike. He reportedly suffered serious injuries and is being treated at The Outer Banks Hospital.

Jones was charged with careless and reckless driving.

The Toyota driver was shaken, but did not report any injury at the scene, stated KDHPD.