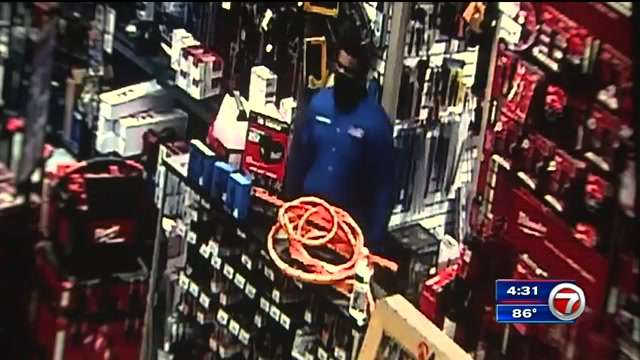 FORT LAUDERDALE, FLA. (WSVN) – The owners of a Fort Lauderdale store have been left reeling after, they said, two men walked into their business and took off with two power tools worth thousands of dollars.

“The door opens, the employee returns to his station, and two customers walk in behind him,” said owner John Ehle.

But he later learned the duo were not customers.

Exterior surveillance cameras showed the thieves pulling up to the business in a white Chevy Malibu, possibly a 2014 or 2015 model, around noon.

One of the masked men walked into the business wearing what appeared to be a uniform. Moments later, his accomplice came in wearing a baseball cap.

“They’re browsing through the select items, the few very rare and expensive items that we just happened to have by coincidence, not a normally stocked item,” said Ehle.

The business owner said the thieves knew exactly what they were looking for and where it was located in the store.

“In the last two hours before the crime happened, there were six different people, standing, touching, having interest in all of the specific tools in this area,” said Ehle. “It’s not unusual to see one or two people over here, but to see a large volume of people in such a short period of time was unusual.”

Ehle said the stolen items are very particular, very expensive specialty tools. The first is a Milwaukee M18 Force Logic press tool, and the other is a portable band saw.

In other words, the business owner said, these crooks are most likely professionals.

“They’re absolute tradesmen. This is what they do for a living, somebody who’s in the fields, who knows what these tools are, who’s had a boss who’s put them in their hands,” said Ehle. “There’s no doubt about it.”

The surveillance video shows the thieves scoping out the store, then casually walking out of the store with the tools and driving away in the Malibu.

Ehle said a customer noticed what was going on and followed them.

Now this family-owned business is asking for the public’s help to catch these crooks.

“This is our livelihoods here and not just my livelihood or my family’s but also these other families who depend on this business to survive,” said Ehle.

Police examined surveillance video from neighboring businesses and managed to get a partial license number of the truck from the customer that followed the Malibu.

If you have any information on this theft or the subjects’ whereabouts, call Broward County Crime Stoppers at 954-493-TIPS. Remember, you can always remain anonymous, and you may be eligible for a $3,000 reward.