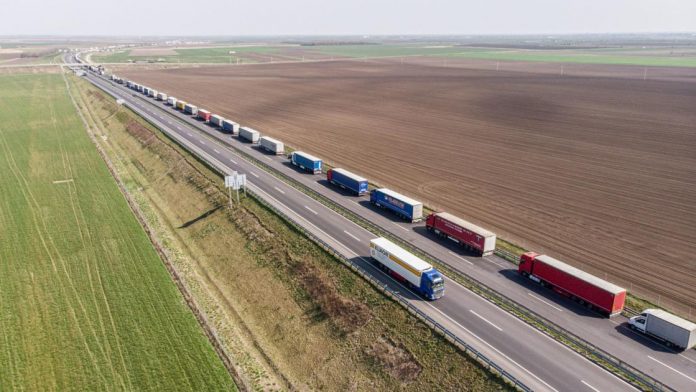 Covid-19 is about to put the global trading system through its most dramatic stress-test since World War II, with supply lines for essential food and medical goods entering a critical phase as the pandemic peaks in the U.S. and Europe.

Hospital staff in the world’s richest countries are dying for lack of protective gear, and governments are also running short of ventilators and medicine. Under pressure to secure supplies, officials are starting bidding wars and throwing up new trade barriers.

The other urgency is safeguarding the world’s food chain, and the people who process and transport it. From meatpackers to vegetable farms, and trucks to merchant ships, workers and infrastructure are showing signs of fatigue.

In short, the backbone of global trade needs reinforcement before anyone can think of moving on from crisis-mode to recovery.

Shipping companies, for example, which carry some 80% of internationally traded goods, are operating with crews who’ve been stuck on their vessels far longer than usual.

Typically, about 100,000 seafarers – one in 12 of the global total – board ships each month to relieve colleagues. Those crew changes are impossible now in much of the world because of restricted air-travel or port rules.

“Once we get to the middle of May, this is going to be a real crisis unless we start taking action now,” Guy Platten, secretary-general of the International Chamber of Shipping, said in an interview. The ICS is urging the Group of 20 major economies to classify seafarers as “essential” workers, so they can move more freely to and from their jobs, particularly through airports.

Companies like Oldendorff Carriers are bearing the brunt of restrictions. Germany’s largest transporter of commodities like grain, coal and fertilizers, it has 700 ships and 4,500 employees — some of whom haven’t been home for months.

“The crew aren’t supposed to stay on ship in perpetuity,” said Scott Bergeron, Oldendorff’s director of business development and strategy. “The equivalent is like a doctor or nurse being told, ‘You can’t go home at the end of your shift, you’re at the hospital until the crisis is over’.”

Truckers are encountering snarls, too. In parts of Africa, they can’t even make it to work because there’s no public transportation. In Europe, they’re enduring long waits at supposedly open borders.

And all over the world, drivers hauling goods across or between nations are running into locally enforced rules aimed at locking down the wider population to stop the virus from spreading.

“We have had a lot of governors and mayors putting up barriers to the safe and efficient movement of goods,” said Sean McNally, a spokesman for the American Trucking Associations. “If officials want to have store shelves re-stocked, and hospitals supplied, they need to make accommodations for trucks and truck drivers.”

President Donald Trump on Tuesday sought to reassure Americans that their food supplies are safe. At a White House briefing, he said U.S. farmers can produce in abundance, and food retailers like Kroger and Walmart seem to be in “very good shape.”

Yet the problems are piling up.

Smithfield Foods, the world’s biggest pork producer, is among the American food-processing companies to close plants temporarily because of virus outbreaks among employees.And when slaughterhouses stay shut for too long — as well as reducing supplies and ratcheting prices up — it creates a dilemma for farmers. Some choose to euthanize part of their herd, rather than foot the bill to keep feeding them.

Fruit and vegetable growers from California to Spain are already watching their harvests go to waste. Dairy farmers from the U.S. Midwest to Britain’s Midlands are dumping surplus milk.

Not every lifeline is under strain. America’s pharmaceutical supply chain “is in good shape,” Larry Merlo, chief executive of CVS Health Corp., told Bloomberg Radio last week. The company has about 10,000 outlets, and Merlo said its suppliers tend to carry enough stocks for three to six months.Still, researchers at the University of Minnesota’s Center for Infectious Disease Research and Policy recently warned that there could be shortages in life-saving medicines. Stocks are hard to quantify because of “the lack of structural transparency and available supply chain data about drugs,” they wrote.

Beyond the health crisis, leaders are already looking to the economic snapback they hope will follow. The resilience of supply chains will be crucial in determining how fast it arrives.”Say a large container port is struggling with Covid-related issues,” said William Davis at maritime logistics firm T Parker Host in Norfolk, Virginia. “Well, guess what? Critical medical supplies coming off container ships, and critical food supplies, are disrupted” — and ultimately can’t reach the consumer.

That kind of pressure on the provision of basic needs is leading governments to raise barriers against exports of food and health products. And it’s one reason why a political fight is looming, as some nations seek to redirect production of key supplies back home and undo decades of investment in globalization.

The U.S. and Europe are already split on the issue.

“Self-sufficiency is not an option for any country,” Sabine Weyand, the European Commission’s director-general for trade, said last week. She gave the example of ventilators, breathing aids crucial to the fight against coronavirus. They can contain as many as 900 pieces sourced from all over the world.

In the other corner: Peter Navarro, Trump’s virus tsar. On Easter Sunday, he said America’s dependency on globalization was behind shortages of medical supplies.

“If we made it here, we wouldn’t be faced with this,” he said. “That was the original sin.”

€735,000 worth of machinery added to Council’s Roads Fleet