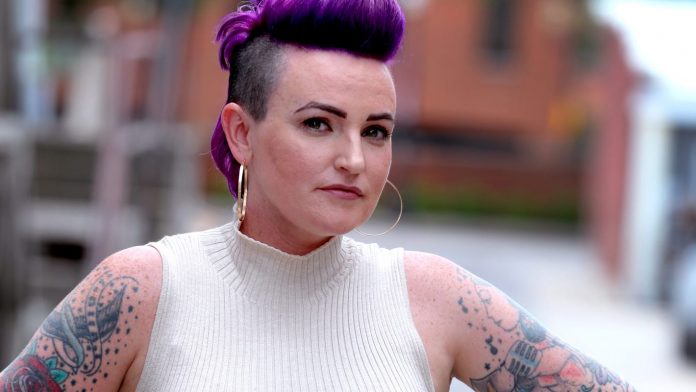 Flavors of Puerto Rico and Cuba are coming to downtown Murfreesboro in August.

Empanada Sonata, which has operated as a food truck for years in New York and now Tennessee, is setting down roots at 211 W. Main St. Plans are to open the restaurant downtown in August.

“I just don’t know how to act. I’m so thrilled all these people are going to be able to try my food,” said Marlyse Moran, who co-owns the restaurant with husband Keith Moran.

It’s a dream come true for Moran, whose food is inspired by her mother’s Puerto Rican and Cuban heritage. Although she wasn’t able to attend culinary school, years under the feet of her mother provided the experience she needed to win a loyal following of empanada fans.

Marlyse Moran stands in the alley next to what will be her new restaurant The Empanada Sonata, on Friday, June 22, 2020, in downtown Murfreesboro. (Photo: HELEN COMER/DNJ)

“My mom always let us stay in the kitchen, even if it was just pouring flour or mixing something. It just got to be a passion,” said Moran, who is taking on the challenge of opening a restaurant with a toddler and infant in tow.

Ties to the restaurant business run deep in the family. Her husband owned a pizzeria in Brooklyn, New York, when they met.

But after the birth of their children, the Morans decided to make a move to an area they considered to be a better place to raise children. So a little more than a year ago, they moved to Middle Tennessee and began operating the food truck here.

“(Empanada Sonata) went over extremely well. Now we need to be in one place,” Moran said.

The couple looked for a stationary place and found it in downtown Murfreesboro at the former home to Nick Newton’s and Spinelli’s, which closed in March after one of the owners died.

Keith and Marlyse Moran operate the Empanada Sonata food truck and will open a restaurant in downtown Murfreesboro in August. The restaurant will serve Cuban and Puerto Rican food. (Photo: Submitted)

What is an empanada?

When Moran began operating the food truck here, she discovered a lot of people weren’t familiar with empanadas, a type of fried turnover filled most often with seasoned meats. But Moran has taken that traditional dish and filled it with just about anything you can imagine.

“We always have classic beef, chicken, spinach and mozzarella. Every week we change and have four special ones (on the food truck). We have over 35 (we can make),” Moran said.

One of the most divine options is the cannoli cream, which is made by a friend in New Jersey with imported ingredients from Italy. This dessert empanada is frozen and then fried, much liked fried ice cream, Moran explained.

On the food truck, every empanada is made to order.

“Every ingredient we use is fresh, every sauce I make is from scratch. A lot of love goes into putting these together,” Moran said.

The restaurant will retain that fresh vibe, and Moran can bring more traditional Cuban and Puerto Rican dishes to the table they weren’t able to serve on the truck.

Along with the empanadas, the restaurant will have traditional black beans and rice, with  plantains served in various ways in numerous dishes made with Moran’s creative touch.

For instance, the Cuban sandwich is served on a fried plantain molded to the style of bread.

Another dish will be the mofongo, a Puerto Rican dish with fried plantains as its main ingredient. The plantains are picked green and fried, then mashed with salt, garlic and other ingredients.

There will also be a kids menu, as well as a whole host of other dishes made with family recipes.

In addition to the Empanada Sonata, Murfreesboro Axe is relocating from its current College Street venue to share the space.

“We will have ax throwing, lots of beer options, cans and on tap, now that we have a bar. More seating at the bar for hanging out and obviously serving their food as well. We are hoping to have weekly trivia as well as our leagues we normally offer,” said Lucas Johnson, owner of Murfreesboro Axe and Escape Murfreesboro.

The pairing of food and a fun activity fit perfectly, Moran said.

With the storefront, Moran plans to expand the family’s community outreach.

They will continue raising funds and donating to children’s cancer research. A close friend’s son died from diffuse intrinsic pontine glioma, an incurable brain cancer. For years all the tips from the food truck were used to help provide wishes for terminally ill DIPG pediatric patients.

“We want to be involved in the community,” Moran said.

How do you eat an empanada? The owner of Pilar’s Empanadas Argentinas in Cape Coral explains.

Reach Nancy DeGennaro at degennaro@dnj.com and follow her on Twitter @NanDeGennaro. Keep up with restaurant news by joining Good Eats in the ‘Boro (and beyond) on Facebook.