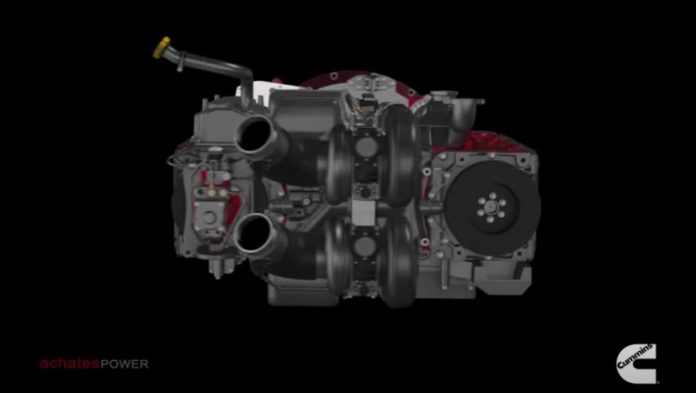 When you think of an engine that must withstand the utmost of abuse, your brain likely goes to something built for a Le Mans team. While there is no denying the feat of engineering that is a modern racing engine, they don’t really compare to a military powertrain like the Cummins’ Advanced Combat Engine. This four-cylinder diesel features one of the funkiest designs we’ve seen, and manages to produce 1,000 horsepower.

The Cummins’ Advanced Combat Engine is the result of a $47.4 million government contract from 2017 and a whole lot of trick engineering. The 14.3L diesel engine is unlike any found in a production vehicle, and not just because of its enormous 873 cubic-inch displacement. It features no valve train, and a two-cycle operation rather than the more normal four-stroke we’re familiar with. It also uses an opposed-piston flat-layout, with eight pistons despite its cylinder count. Each bank of the motor has its own crankshaft, with pistons coming together with each stroke to build compression.  Oh, and it happens to be twin-charged.

A gear-driven supercharger helps to feed air into the two-cycle engine, as does a pair of Holset HE500 variable geometry turbos. The engine may be massive, but it can easily deliver 1,000 horsepower at 2,600 RPM without breaking a sweat. This is because of the engines unique layout, which aids in managing heat and allowing for greater efficiency in a military application.

The Cummins’ ACE is actually somewhat compact for its displacement, as it was designed for use in the cramped M88 Hercules recovery tank. While we’re certain it won’t find its way to a Ram Truck anytime soon, Cummins has confirmed that the platform is modular, and could be adapted for use in Class 8 commercial vehicles. A 10.6L three-cylinder, and a larger six-cylinder engine have both been discussed.