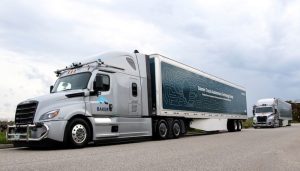 It was a year ago this month that Daimler Trucks and Torc Robotics partnered after the U.S.-based automated driving technology company became part of Daimler Trucks’ Autonomous Technology Group.

During that year together, the partnership has collaboratively pursued a common goal of bringing series-produced highly automated trucks (SAE Level 4) to the roads within the decade; including on-road deployment of a Level 4 test fleet, initiation of redesign of truck chassis, adoption of a hub-to-hub model, formalized rigorous testing protocols, formal truck safety driver certification process, and extended software capabilities.

Now, the Autonomous Technology Group will extend its testing to New Mexico by building up a new testing center in Albuquerque. Expanding to a new location will support testing and provide data for more use cases of next generation vehicles on public roads starting this fall, Daimler says. During the pandemic downtime, the teams continued testing by focusing on robust simulation testing. Daimler says public road testing with safety and health protocols in place resumed in Virginia in June 2020 and will be continued with the next generation of automated driving software. The team in Oregon will continue focusing on the development of vehicle safety systems, which are critical for delivering the safety standards for self-driving trucks today and in the future. The goal is to refine a truck chassis that is perfectly suited for highly automated driving and includes the redundancy of systems needed to achieve safe, reliable driving, the company says.

“After one year of collaboration with Torc, we have successfully deployed trucks with SAE Level 4 intent technology on public roads and expanded our test fleet with trucks, miles and learnings,” says Martin Daum, chairman of the board of management, Daimler Truck AG and member of the board of management, Daimler AG. “Partnering with Torc has created a unique and even more powerful team of innovators at Daimler Trucks.  We remain fully committed to this collaboration and to focusing on the shared goal of bringing highly automated trucks to series production.”

Adds Daimler Trucks North America President and CEO Roger Nielsen, “We know this will not happen overnight, but with our priority and vision for safer roads and efficiencies for our customers, we are committed to the journey. We listen carefully to our customers and we see potential to deliver commercial value to them and to society.”

“We have accomplished a lot during the first year,” says Michael Fleming, CEO, Torc Robotics. “In addition to testing our technology stack on trucks on the highway in Virginia, we have scaled up our team and grown quickly – recently opening our expanded headquarters in Virginia to accommodate this growth. Daimler’s commitment to safety, innovation leadership of truck technology and foundational knowledge of on-road scenarios that truckers encounter has moved our system faster than we could have done alone as a technology firm. By working with the inventor of the truck and number one truck OEM, we are convinced that Level 4 trucks can be commercialized safely with a strong business case.”