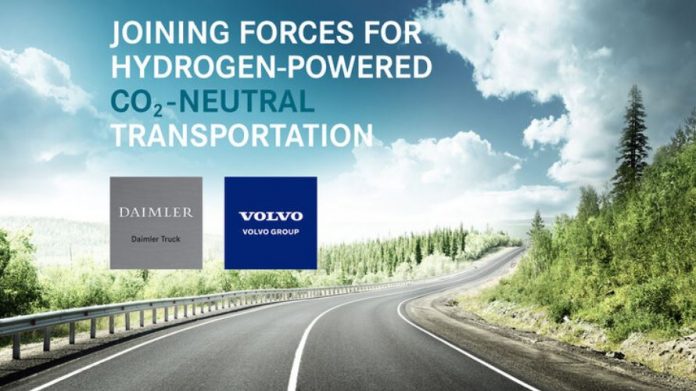 Production facilities will be set up in Germany and Canada, they said.

The aim is to develop, produce and commercialize fuel cell systems for heavy-duty vehicle applications and other uses.

Daimler and Volvo will be 50/50 partners in the joint venture, which will operate as an independent and autonomous entity.


“This joint initiative with the Volvo Group is a milestone in bringing fuel cell powered trucks and buses onto our roads.”


– Martin Daum, chairman of the board, Daimler Truck AG.

“For trucks to cope with heavy loads and long distances, fuel cells are one important answer and a technology where Daimler has built up significant expertise through its Mercedes-Benz fuel cell unit over the last two decades,” said Martin Daum, chairman of the board at Daimler Truck AG.

“This joint initiative with the Volvo Group is a milestone in bringing fuel cell powered trucks and buses onto our roads.”


“By forming this joint venture, we are clearly showing that we believe in hydrogen fuel cells for commercial vehicles,”

Martin Lundstedt, Volvo Group president and CEO, said electrification of road transport is a key element in delivering the so-called Green Deal, a carbon-neutral Europe, and ultimately a carbon-neutral world.

“By forming this joint venture, we are clearly showing that we believe in hydrogen fuel cells for commercial vehicles,” he said.

But Lundstedt added that for this vision to become reality, other companies and institutions also need to support and contribute to its development.

The goal is for both companies to offer heavy-duty vehicles with fuel cells for demanding long-haul applications in series production in the second half of the decade.

In addition, other automotive and non-automotive uses are also part of the new joint venture’s scope.

The preliminary agreement is non-binding. A final agreement is expected by the third quarter and closing before year-end 2020, the companies said.

All transactions are subject to approval by regulators.

Toddler gets out of California home unnoticed, is struck and killed...