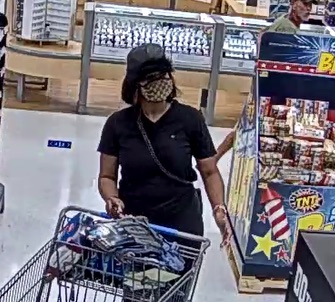 The Dalton Police Department is asking for the public’s help to identify a woman who used stolen bank cards to rack up approximately $6,000 in fraudulent charges. The suspect and the vehicle she was traveling in were recorded by store surveillance.

The incident began when a victim’s purse was stolen from a store in Tunnel Hill. While investigating the theft, the victim and the Tunnel Hill Police Department were able to determine that the victim’s bank card was being used in Dalton at the Shugart Road Walmart. The Tunnel Hill PD contacted police in Dalton who responded to the store but the suspects had already left the scene after purchasing $852.71 in gift cards and also several pairs of men’s boxer shorts. The suspect left in a white Toyota RAV-4 SUV which was recorded by surveillance cameras outside of the store, but investigators were unable to get a clear look at the license plate and the possible license plate combinations did not return with any information. Further investigation determined that the suspect also used the stolen cards at a Dollar General store and a Walgreen’s location before going to the Walmart. In all, the victim’s credit cards were used to rack up approximately $6,000 in fraudulent charges.

The suspect in this case was a Black woman wearing a tan-colored face mask with some type of checkered pattern. She also wore a black ball cap, a black V-neck T-shirt and black pants with cheetah-print slip on style shoes.

Anyone who recognizes this individual is asked to contact Detective Clinton Travis at 706 278-9085, extension 9-231.

On The Hook! fish and chips food truck to park in...

ITS fleet founder Max Haggarty passes away at 85 – Truck...