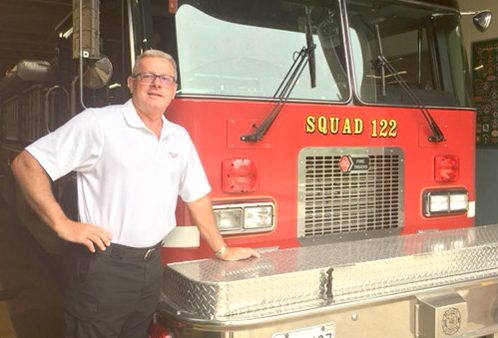 Motivated by the tragic death of a toddler, he gravitated early in his career towards fire prevention and public education, and now the retired Wellington North fire chief will focus on educating children about safety.

“I have really enjoyed it,” Guilbault said of his 45 years working with fire departments across Ontario.

“It will be difficult for the next little while getting used to not going to the station … but it’s time. You know when it’s time.”

Having a home garage that “looks like a fire station,” including an old fire truck, helmets and bunker gear, will certainly help to assuage any difficulty, he jokes.

“He’s been a major contributor to our organization for the last six years,” said Lennox.

“I want to thank him for his service and we wish him all the best.”

Guilbault started out at age 18 or 19 with the Ottawa fire department in 1972. His late father was a captain with the department at the time and his brother is also a firefighter.

“It’s in our blood. We’re a firefighting family,” he said.

When he first joined the department, some of the men retiring were Second World War veterans who didn’t have much time for dwelling on the job’s tough days.

Guilbault laughs in hindsight, understanding the men meant no harm, but about 15 years into his career, he experienced a tragedy that has stayed with him to this day.

During one of his shifts he was part of a team that was unable save a toddler from a house fire.

“It really upset me,” he said, adding he couldn’t get over it, even though, as his father reminded him, “it’s part of the job.”

Not long thereafter, he went to his chief with a plan to establish a fire prevention and public education division, which turned out to be timely and was approved.

As fire inspector and head of the first public education division in the province, his team helped with the rebirth of “Sparky” the Fire Dog in 1987, visiting dozens of schools, day cares, seniors homes and the Children’s Hospital of Eastern Ontario.

Two years after being promoted, Guilbault moved on to nearby Kanata, where he served as deputy fire chief until 1996.

He then served as fire chief for two years each in Ancaster and Chatham-Kent, before retiring to Bobcaygeon.

About a year later he was “coaxed out of retirement” to serve as director of emergency services for Kawartha Lakes, a position he held for 10 years before retiring for a second time.

About three years later, in 2014, he was again asked to come out of retirement – this time for a six-month contract to help unite Wellington North’s stations in Arthur and Mount Forest.

“Change is hard in fire services … a lot of people did not like change.”

The six-month contract turned into a six-year stint at the helm of the department.

“He will certainly be missed. We wish him well,” the mayor said of the thrice “retired” chief.

“But it’s not about awards, it’s about saving lives,” he said, noting he has helped establish several peer support teams within fire departments he has managed over the years.

Guilbault said he will take the summer off before starting a new chapter in September as a teacher.

“I am extremely grateful to serve in the most respected, most honourable and most dedicated profession worldwide,” he said.

“I am truly blessed.”

Truck drivers to be given free meals at Florida rest stop...

Driver is killed and major Monash freeway is closed after crash...