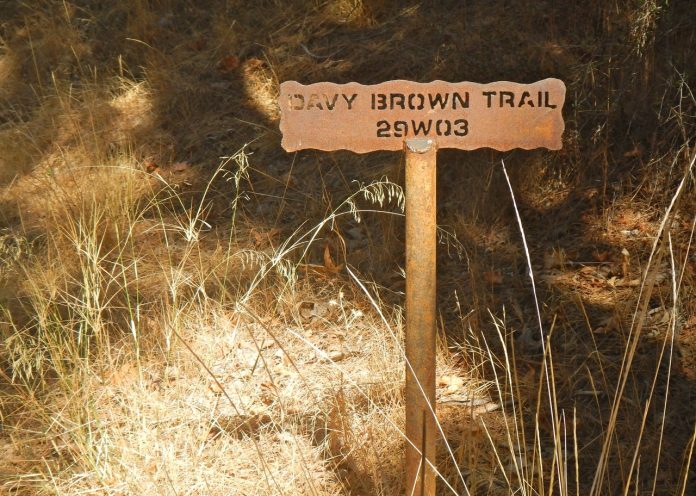 Wednesday, June 3, along perennial Davy Brown Creek: It’s 91 degrees at 11 a.m., buggy, and not surprisingly, there are no other campers at this enticing U.S. Forest Service backcountry camp.

The forest service finally opened up overnight camping at many campsites on June 2, yet ironically closed down open campfires, except for specific developed sites listed at its website, including Davy Brown in the Santa Lucia District.

In any event, my spouse and I wouldn’t dream of making a campfire in such warm conditions, and one is honestly unneeded. The springtime breeze wafts gaily through the small, well-watered canyon as wildflowers wilt and fall to the ground. The ubiquitous yellow monkey flower bushes hold on bravely while their friends huddle in the dust.

At campsite No. 7 — my favorite — we backed the small truck beneath the towering oaks to a position just 10 to 15 feet from the musical water’s melodious warbling. At night, we heard the booming hoot owl’s cries, and daytime redtail hawks relentlessly hunted about. Quail ran all over the roads.

For $20 per night, we slept in the truckbed covered by a fiberglass shell while the hydro-orchestra churned vigorously all night beneath shining moonlight. Go to https://campone.com/campground-finder/ to make reservations online.

Here’s what you get for $20: a wooden table, an iron firepit (legal for fires), a stand-up barbecue grill, a pit toilet down the road and access to a trash dumpster. It’s about the same at nearby Nira Camp and over at Figueroa Mountain Camp (no water there at all). The heat and wind must be brutal high up in little-used Figueroa Mountain Camp.

My partner and I vividly recall camping at Davy Brown in the late 1980s with our son; the feds (not Parks Management Co.) charged $2 per night, and they provided running water from a faucet at each campsite (and trash pickup). Later, when the shaky plumbing failed, Davy Brown campsites were free, but the earlier pit toilets were sensationally gross, and there was no trash pickup.

Later in the day, we ambled along the very rough camp road to the uppermost campsite, “behind the huge boulder,” where we met the only other overnight camper — a wonderful fellow I know, and quite a rhythm-and-blues musician. After a chat, we walked back to No. 7 and never saw him again.

Married in the iconic year 1968, three weeks before the Black Student Union took over UC Santa Barbara’s North Hall (Oct. 14), my partner remembers enjoying our car camping adventures in Greece (the Peloponnese), the eastern high Sierra Nevada, Mexico, Anza-Borrego and other locales, but the Davy Brown site at the edge of the San Rafael Wilderness rocks in special ways.

As Henry David Thoreau knew, we humans need both a social life and solitude, and he discussed both states in depth.

As environmental historian Jedediah Purdy writes in his latest book, “This Land Is Our Land,” Thoreau thought both states were absolutely necessary but obviously impossible: “Alone, you were in the company of received ideas, condescending self-judgment, anxiety that you were not doing your part; in company, you were alone in your strange mind … throwing words like stones into the pools of other people’s minds, disturbing their smooth surfaces” (Purdy, p. 62; see 4-1-1 Books).

“Adjacentcy” is my neologism that I often use in my hiking books when trying to explain some of the odd benefits of the unhappy Anthropocene Age we’ve created as a species.

Adjacentcy describes the situation, for example, in Los Angeles County with the Santa Monica Mountains Conservancy trails area of 75,000 acres, or how 4,300-acre Griffith Park in Los Angeles is the largest U.S. municipal park with an urban wilderness in the United States.

We Barbareños pushed up against the sea by the Santa Ynez Mountains also enjoy a magnificent adjacentcy with the literally adjacent 400-acre Rattlesnake Canyon Wilderness Area and the many frontcountry and backcountry trails.

Thus, in a single overnight spent in our small truck at Davy, we experienced a welcome adjacentcy and tight proximity to genuine wilderness, yet we’re only a 90-minute drive from Santa Barbara. As I have pointed out in earlier columns, there are at least five very good day hikes coming out of Davy Brown (or nearby Nira).

Certainly, other city folk come up just for the day, and if you park just outside Davy Brown Camp, you need not give your money to the Parks Management Co. since you won’t be staying the night or using the amenities.

We vagabonds from town flee to the outback, and the lucky adjacentcy eases our exits from town. When I’m sitting at site No. 7’s rickety wood table at 4:40 a.m. (June 4), I can just detect the predawn light in the east, although sunrise is actually at 5:47 a.m.

Davy Brown and the other backcountry sites are “primitive” in the best sense of that term — no white noise, few humans, consistent wassermusik, abundant flora and fauna. Since I’ve never owned a cellphone, I don’t miss the constant contact and cannot stand the idea of being alone together.

Campfires do seem to be allowed in developed campsites, but the forest service isn’t very clear about it. Reading the fine print on the board at Cachuma Saddle indicated that Davy Brown and Nira Camps were OK for woodfires (lead photo).

On the Wednesday afternoon, amid high humidity, heat and flies buzzing, the storm gods sent a brief 20-minute shower with ominous thunder simply to astonish the denizens below. I didn’t even bother to put a rainfly on the erected small tent that held some of our gear.

One great thing about the wilderness is how she always surprises you.

» Driving the 47 miles to Davy Brown Camp: Take Highway 101 north to Highway 154, drive past Lake Cachuma to the Armour Ranch Road turnoff at the Santa Ynez River concrete bridge. After one mile, turn right again on Happy Canyon Road. Davy Brown Camp is one mile before the road ends at Nira Camp.

— Dan McCaslin is the author of “Stone Anchors in Antiquity” and has written extensively about the local backcountry. His latest book, “Autobiography in the Anthropocene,” is available at Lulu.com. He serves as an archaeological site steward for the U.S. Forest Service in the Los Padres National Forest. He welcomes reader ideas for future Noozhawk columns, and can be reached at cazmania3@gmail.com.