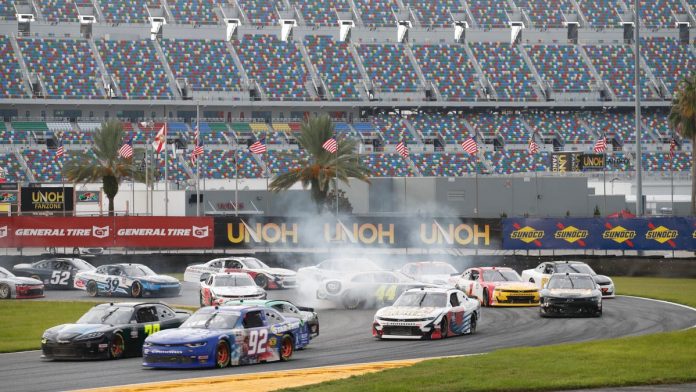 DAYTONA BEACH — The Daytona Road Course NASCAR Cup Series race was born out of necessity, and while this likely one-off event will be bookmarked in stock-car racing history, it holds the promises of eventful and entertaining.

Well, the first few laps at the very least.

The Go Bowling 235 was supposed to be held at Watkins Glen (New York) International, but when the state border was virtually closed to outsiders (mandatory, two-week quarantine), Daytona International Speedway became a logical alternative.

In order to accommodate these heavy stock cars powered by 750 horsepower engines, NASCAR had a temporary chicane placed near the exit to tri-oval Turn 4.

Kevin Harvick and Denny Hamlin will take the field to the green flag at 3 p.m.

The Cup cars are expected to edge up to the 190 mph mark before drivers begin frantically downshifting and braking and praying to make it through the permanent chicane at the end of the backstretch.

Race fans got a taste of what will happen thanks to the Xfinity Series race on Saturday.

Austin Cindric, driving the No. 22 Team Penske Ford, captured the UNOH 188 Xfinity Series race, which got a late start because of lightning on Saturday evening.

Brandon Jones, wheeling the No. 10 Toyota, was second followed by Noah Gragson in the No. 9 Chevrolet.

The 52-lap race over the Daytona Road Course started late because of lightning delays. The Xfinity cars put on a show over the new course.

[RELATED STORY: Daytona has a history of crazy.]

After they come up through the gear box through the East Banking, they must repeat the slow-down process, and again approaching road course Turn 1.

All the drivers have run laps on the 3.57-mile road course. Kinda.

These industrious race folk have wheeled the course in simulators for weeks as prep for this moment.

Why is this happening?

Because of time constraints, social distancing mandates, lack of personnel and several other factors, the first time this group of drivers will get laps at speed is after they buckle into their machines for the 3 p.m. start.

These stock cars can run in moderate rain conditions, but everyone must seek shelter when lightning is detected within eight miles of the track.

The weather forecast is like watching a looping video. It never changes this time of year. The high will reach into the 90s and there’s a 60% chance of thunderstorms.

When they do crank up and go, it should be interesting for the limited number of spectators in the stadium seats and those watching on television.

Unlike the previous two days, race fans will be welcomed into the grandstand areas.

The majority of these drivers have never raced the regular road course, which annually hosts the Rolex 24 At Daytona sports-car endurance race.

For instance, Bubba Wallace’s only experience on this road course goes back to his NASCAR Truck Series driver days.

“We used to park our motorhome on the infield course,” he said with a laugh.

Kyle Busch may have a leg up on the field because he wheeled a GT here back in February.  Big brother Kurt Busch competed in a couple of 24-hour runs more than a decade ago.

But for the most part, this will be taking a large step into the great unknown for these stock-car pros, who are more comfortable on NASCAR’s big, wide, turn-left only ovals.

“I think it is going to be exciting but it’s also going to be really hard for the guys that have never made a lap there before,” driver Chase Elliott said.

“I think it’s going to give a pretty big advantage to those who’ve run the 24-hour race and have made any laps on that track. I’ve never made a lap. I don’t even know what turns are where.”

Why: Cup Series moved from Watkins Glen, New York because of COVID-19 pandemic

Scheduling PM and stocking the right products will help you prepare...