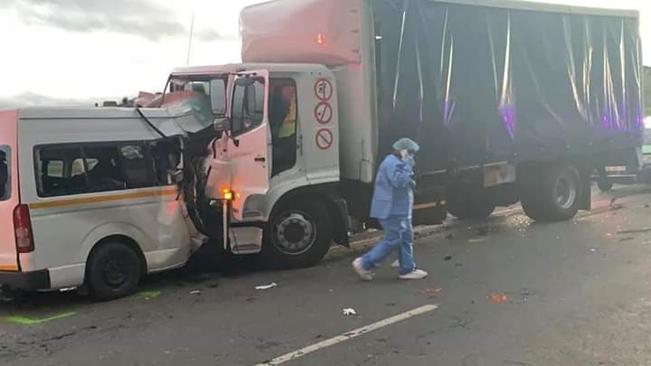 By Sisonke Mlamla 7h ago

Cape Town – At least 15 people have died and two others were seriously injured in a collision between a truck and a minibus taxi in the Eastern Cape.

The head-on crash on the N2 between Mount Ayliff and Mount Frere happened at about 4.30pm on Wednesday.

Initial reports placed the death toll at 11. However, rescue officials have since discovered four more bodies at the scene.

The deceased were all occupants of the minibus taxi, while the injured were in the truck.

Transport Minister Fikile Mbalula has sent his condolences to the bereaved and wished the injured a swift and full recovery.

Mbalula expressed his disappointment that the minibus was fully loaded and in contravention of the lockdown regulations.

Tikana-Gxothiwe said the accident comes as a major setback to a province that has just recorded an unprecedented low of eight fatalities during the Easter season.

“Our thoughts and prayers are with the bereaved families during this difficult time. We also wish to call on those who, for whatever reasons, are permitted to use our roads during this lockdown to continue being cautious and adhering to the rules of the road at all times,” Tikana-Gxothiwe said.

She also lamented the disregard for the Covid-19 regulations and the rule of law in general.

“It is very disturbing that at a time when the number of Covid-19 cases is climbing on daily basis, there are still those who have no regard for the regulations in place.

“The 70% passenger limit had been widely communicated and is known by everyone. It is this complete disregard for the rule of law that has led us to where we are today,” Tikana-Gxothiwe said.

Mbalula said the matter has been handed over to law enforcement officials.

“The Road Traffic Management Corporation’s Crash Investigation Unit will be working with the South African Police Service to ascertain the cause of the collision and probe the contravention of the lockdown regulations,” he said.

This comes a month after 26 people died and 71 were injured in a bus accident in in a village called Qolweni in Nxaxhu, outside Centane in the Eastern Cape.

Child, 3, Runs Into Road, Hits Side Of Pickup Truck: Cops