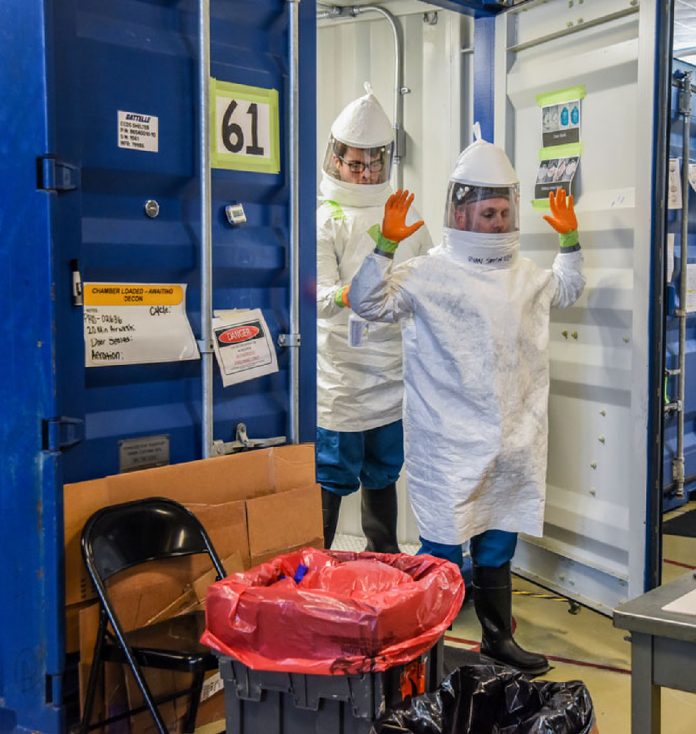 A mask decontamination system set up in Jefferson City months ago continues to serve the state’s medical and first responder community amid the COVID-19 pandemic, and the system has a lot of room left to grow within the tight confines of its chambers.

As the pandemic took hold this past spring and supplies of personal protective equipment including N95 respirator masks drew short, a Battelle Critical Care Decontamination System was deployed in April in Jefferson City to serve hospitals, health care providers and first responders from across Missouri.

The system — located inside the Missouri National Guard facility on Armory Drive — uses vaporized hydrogen peroxide to sanitize N95 respirator masks up to 20 times per lifetime of each mask, and up to 80,000 masks per day can be handled.

Missouri Department of Health and Senior Services spokeswoman Lisa Cox said Friday that 5,755 masks had been decontaminated at the site to date.

While actual demand has so far not come anywhere close to capacity, the system is still operating, with a crew of workers Thursday loading another batch of masks to be decontaminated and a delivery driver stopping by to pick up boxes of masks ready to be sent out.

The system is a stop-gap measure until PPE supply chains stabilize, said Phillip Beske, a principal research scientist and toxicologist with Battelle who is the site lead in Jefferson City.

The U.S. Food and Drug Administration in March issued Battelle an emergency use authorization to deploy its decontamination system, and Battelle’s website now lists 45 operational sites in 35 states and Washington, D.C., including Missouri’s only site in Jefferson City.

The decontamination system was developed in response to the 2014 Ebola outbreak at the FDA’s request, Battelle President and CEO Lou Von Thaer said in a company news release this month.

That outbreak of Ebola in West Africa lasted more than two years — killing 11,310 people in Liberia, Sierra Leone and Guinea, and leading to about three dozen cases and 15 deaths in other countries, including the U.S. — and it prompted a large-scale international health community response.

For now, the decontamination system in Jefferson City is expected to be there for at least another few months — six months from last May.

“It’s great to see masks coming back that have been marked up a couple times,” Beske said.

What Beske referred to by “marked up” is the tracking of each shipment of masks. Each facility that sends them has a three-digit code that’s written on each individual mask, as well as on any box the double-bagged masks are shipped in.

The masks arrive in Jefferson City by courier, FedEx or by being dropped-off in person — all at no charge to the organization the masks come from or to the state.

The system is paid for by the Federal Emergency Management Agency and U.S. Department of Health and Human Services, said Paula Nickelson, administrator with DHSS’ Office of Emergency Coordination.

Once masks arrive and the shipment is scanned into the tracking system, the masks remain unopened until inside the entryway of a decontamination chamber, with the outer door shut behind. There are four such chambers — each one basically looking like a shipping container of the kind found on the back of a big-rig truck, but with lots of extra features installed, including negative interior pressurization to keep air flowing in, and not out, and multiple medical-grade air filters.

Once inside, workers wearing protective gear of their own load the masks onto shelves, then spray themselves down with ethanol as a disinfectant as they exit to do the remainder of their own decontamination process.

Inside the decontamination chamber for the masks, hydrogen peroxide vapor is pumped in. After the masks are basically soaked in it, they are dried out with air until the amount of hydrogen peroxide on them reaches safe levels for eight-hour exposure.

Beske said chemical indicator cards in the chamber are used to determine if there’s been a “six-log kill” — that 99.9999 percent of anything on the masks, including the coronavirus that causes COVID-19, is dead.

Once the clean masks are removed from the chamber, they’re ready to be packaged and delivered back to where they came from — unless they were determined upon arrival to be too soiled to be effectively cleaned, in which case they’re disposed of.

Beske said the numbers of soiled masks disposed are also tracked, and organizations are told why their masks were discarded so they can avoid the same thing happening in the future — when dirt, makeup, blood or other substances get on the masks.

The whole process from receipt on site to being ready for delivery has a target turnaround time of 72 hours, Beske said.

More information on the system and for interested health care providers is available at battelle.org/inb/battelle-critical-care-decontamination-system-for-covid19.

The Musk Ox and Me

New York Barber Fined For Cutting Hair in Back of Pickup...