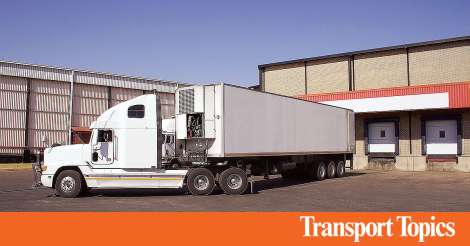 [Stay on top of transportation news: Get TTNews in your inbox.]

Trucking has seen a turnaround bolstered by spot market rates and increased demand.

“There is definitely strong upwards trends in both demand and rates,” Nick Wynkoop, product manager for rates and analytics at Truckstop.com, told Transport Topics. “Usually in past Junes, we’ve had yearly peaks in spot markets. That’s usually the highest month. This year, instead of dropping off for July and August, we have continued the upwards trend for spot freight.”

Truckstop.com is an online freight-matching marketplace that tracks industry trends weekly in partnership with FTR Transportation Intelligence. Their latest report found that during the week ended Aug. 7, demand for loads increased 5.4% and spot rates for that week increased 1.6%.

“This has been a very fast evolving environment,” said Avery Vise, FTR vice president of trucking research. “So if you go back to the April and even May time frame, we saw a fairly significant decline in rates in the spot market. You don’t tend to see contract rates change that quickly.”

Spot market rates apply to shipments that need to be moved immediately. Contract rates are the price agreed upon to move a type of shipment over a certain amount of time.

“We’ve seen a pretty dramatic firming of the rate environment,” Vise said. “If you look back to mid-April, we were down on the order of 25% year-over-year in spot rates. At this point, total spot rates are up about 17%.”

The weekly report showed the dry van segment had the most significant year-over-year spot rate increase at 35% for the week ended Aug. 7. The refrigerated segment followed at 27%. The flatbed segment was up 12%.

“We’re talking about levels similar to the increases we saw in the peak in 2018, [when results were up 16%],” Vise said. “But there are differences that are important. One is, we have a demand-driven response here that is combined with capacity. Both are setting the stage for this.”

“States are reopening at different rates and are being hit by the virus at different times. This is leading to unseasonal peaks and valleys in manufacturing output and consumer demand,” Ken Adamo, DAT chief of analytics, said Aug. 13.

“Carrier networks are out of balance due to inconsistent freight demand at a commodity and lane level, and this is leading to a spike in demand for spot freight in order to meet the capacity need,” he added.

DAT said its load-to-truck ratio for vans was up for the third straight month to 4.4, up 25% from June. Spot van rates averaged $2.03 per mile nationally, up 23 cents compared with June and 19 cents higher versus July 2019.

Reefer volumes in July were up less than 1% month-over-month. The load-to-truck ratio was 7.4, four times higher than April’s all-time low of 1.7 loads per truck. The rate was $2.30 per mile, up 15 cents compared with June, and 11 cents higher year-over-year.

Flatbed volume in July was steady compared with June and down 6.6% compared with July last year. The spot rate was $2.20 per mile, 13 cents more than June but 7 cents lower than July 2019.

The trucking industry has much volatility since early in the year when the coronavirus pandemic started rippling through the economy.

“While spot volumes and rates have surged recently, I do not think it is indicative of a tightening market that will cause contract rates to go up.” — Kevin Zweier #covid19impact #transportationindustry #freighttransportation #truckdrivers #diesel https://t.co/i9gZkPZ3Uy

“With COVID, supply and demand has been all over the place,” said Kevin Zweier, vice president of transportation at Chainalytics. “Demand for shipments were down when we were in March, April and May and then it started coming back in June, July and August. That’s where we’ve been seeing the rise in spot rates.”

Further, trucking companies have had to adapt to demand shifting considerably in favor of retail (over the commercial sector) since more people have been staying in instead of going out to restaurants and bars.

“All of these things are adding up,” Adamo said. “Spot rates are up. At their lowest, they may be $1.35 in April when we saw all the restaurants were closed and people weren’t going out. And now we’re seeing rates bumping up if not exceeding $2 a mile for the spot market. That’s just tremendous. Unprecedented levels of rate increases.”

Volumes continue to increase to now +30% over past years. Jordan Abrams’ advice: buckle up. Here’s what happened last week and what to expect this week in the #freight market  https://t.co/yinOGesvX0 pic.twitter.com/VkcMWM3dW2

Jim Nicholson, vice president of carrier sales and operations at Loadsmart, said there is reason to believe there will be prolonged demand through the rest of the year with the strength in imports leading into the holiday retail season.