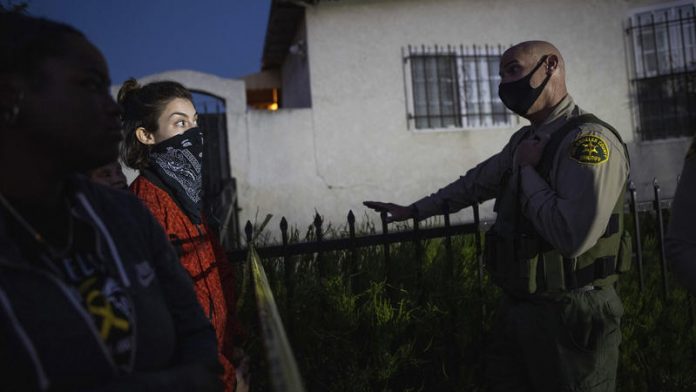 Los Angeles County sheriff’s deputies shot and killed a black man Monday afternoon, sparking a protest and an investigation by homicide detectives. The man had originally been stopped while riding his bicycle, but a fight ensued, the sheriff’s department says.

A large crowd of people gathered near the scene of the incident in south Los Angeles, chanting “No justice, no peace” as deputies stood facing them. They also chanted the name Dijon Kizzee – the dead man’s name, according to the Los Angeles chapter of Black Lives Matter and media reports citing family members. Officials have not yet publicly identified the man.

On scene in South Central Los Angeles, where a neighborhood man was killed by sheriff’s deputies. A crowd of more than 50 has gathered around the corner from body, behind police tape and LASD in riot gear. pic.twitter.com/GpPRyiuplm

The fatal encounter took place around 3:15 p.m. local time. Deputies had pulled the man over while he rode a bike, the sheriff’s department said. It did not provide details about what infraction might have been taking place.

The man fled on foot. An eyewitness video shows him running and carrying what looks to be a bundle of clothing.

When deputies caught up with the man, he “punched one of the officers in the face and then dropped the items in his hands,” Lt. Brandon Dean said in a news briefing Monday evening.

“The deputies noticed that inside the clothing items that he dropped was a black semiautomatic handgun – at which time a deputy-involved shooting occurred,” Dean added. He referred to the man as a “suspect,” although he did not specify what crime the man had been suspected of before deputies approached.

Portions of a witness video posted by Los Angeles TV station Fox 11 shows the man’s body lying behind a pickup truck, as angry onlookers yell at deputies in the street.

“No deputies were injured” in the incident, Deputy Juanita Navarro-Suarez wrote in a statement.

In the aftermath, the local Black Lives Matter chapter called for a public protest.

“Los Angeles County Sheriffs killed a Black man…Dijon…on 109th and Budlong and left his body facedown in the dirt,” the group said. “We need all hands on deck. Please get here ASAP!”

In addition to the area near the shooting, protesters also marched to the nearby sheriff’s station, where the demonstration continued past midnight.

“There were some reports of vandalism during the march, but there was no violence and no arrests,” CBS-Los Angeles reports.

The deadly law enforcement shooting on the West Coast comes after months of national protests over police use of deadly force against Black people and other minorities.

Intense protests continue in Kenosha, Wis., over the death of Jacob Blake, who was shot in the back multiple times at point-blank range. That incident has also triggered counter-protests — and a 17-year-old man has been charged with homicide after he shot and killed two people and injured a third, all of whom had been protesting police brutality.

Two die after crash between motorcycle, pickup in Darke County

La-Z-Boy spells out best practices for reopening its stores