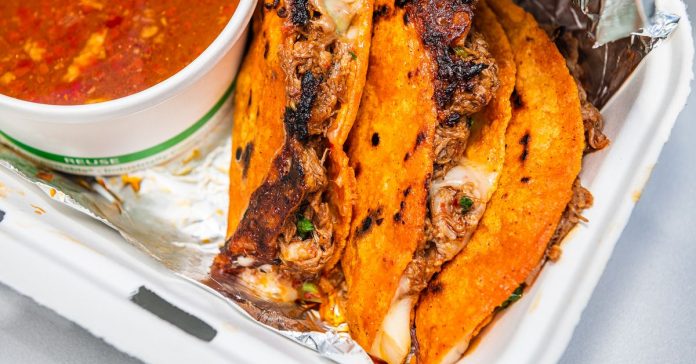 Every day at noon, online ordering for the Little Miner Taco truck opens to the public. Every day, it typically takes 10 minutes or less for the truck to sell out of pickup reservations.

Little Miner started as a stall inside the Savor at 3807 food hall in Brentwood, Maryland, which opened in October. Since rolling out its mobile operation in early May, the nascent taco shop has seen a boom in demand fueled by pictures of braised beef birria and melted cheese tacos that have proliferated across social media.

Once a week, Little Miner Taco posts its neighborhood schedule to Twitter. After customers order, they receive a confirmation email with a queue number and specific time window in order to prevent crowding. Those who are able to place an order on the truck’s website don’t even know the truck’s exact address until they get the email.

The Little Miner stall and its new truck are known for birria de res tacos that are full of melted jack cheese and served with a dark, rich consomé for dipping. The “quesabirria” tacos have made their way from Tijuana to Los Angeles to the San Francisco area. They’re a new sight for many customers in the District.

Chef-owner Mackenzie Kitburi, an alum of Joe’s Seafood, Prime Steak & Stone Crab, was running pop-ups all over the District before opening Little Miner Taco. In addition to the birria tacos, Little Miner serves dishes like lobster quesadillas and carne asada fries. But he says the birria taco, which he researched in Mexico and L.A., is by far the biggest attraction.

Before introducing its truck, Little Miner got a big boost from influencer Danny Kim, who runs the EatTheCapital Instagram account that has more than 76,000 followers. On March 11, Kim posted a close-up video of the birria taco, showing off the fresh-off-the-grill beef in its grease-stained shell before dipping it into the consomé. According to Kim, who says he reached out to Little Miner taco and was not paid to promote the restaurant, it reached over 42,000 people. Kitburi says he instantly saw an increase in demand.

Two weeks later, Maryland Gov. Larry Hogan issued a “stay-at-home” order that would hurt business at the food hall. Kitburi knew he had to adapt quickly, shifting his business model to emphasize online orders and takeout, then deciding to add a truck.

Now Kitburi uses every method of messaging he can to keep up with demand, including phone calls, emails, Instagram DMs, and text messages.

At one peak point on Cinco De Mayo, Kitburi says the truck and restaurant received nearly 2.5 orders per second. Kitburi admits the day could’ve gone smoother, but managing 800 pre-orders and 300 same-day orders was no small task. He says he had 1,489 missed calls.

“These are uncharted waters,” Kitburi says. “We’ve actually grown our staff a lot since this [pandemic] started. We’ve hired a lot of good people who have been laid off from other restaurants.”

When Hogan announced the “stay-at-home” order, Kitburi was picking up his children from school, so he immediately thought about the kids that would miss out on free or reduced-price lunch programs. Since then, Little Miner Taco has been giving out free kids meals, no questions asked. Little Miner Taco had given away over 4,500 meals full of quesadillas, tacos, and other items in about two and a half months.

“It might be safe to say that the news of our free kids meals got us more attention than the birria tacos,” Kitburi said. “I decided no matter what, if kids need to eat, they will eat for free. I didn’t do it for publicity, it’s something I wanted to do.”

Kitburi hopes Little Miner Taco won’t be too adversely affected by the recent disruptions in the meat industry’s supply chain. Within the past few weeks, he’s seen the price of beef double, and he’s had trouble getting shipments in on time. He had to remove the birria tacos for a day earlier this month, but he says he’s adapting to ensure that doesn’t happen.

“We actually purchased two whole cows from local farmers to help us get through the coming months,” he says.

Going forward, Kitburi plans to keep the same system and work on communicating as thoroughly as possible with his customers. In the summer, he plans to add seafood tacos. But as long as he can stock beef, customers can expect more carne asada fries and birria.