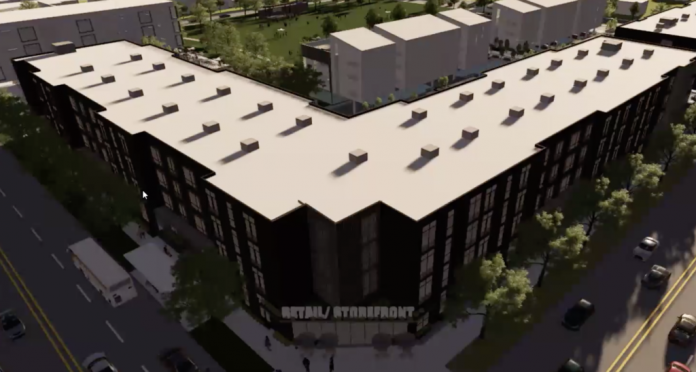 We have new details on a project to make over the site of a former school on the Boise Bench for affordable housing and retail.

The development team and Boise Mayor Lauren McLean talked to BoiseDev about the project – providing additional detail and renderings from our initial story earlier this summer.

A team from Salt Lake City-based J. Fisher Companies won a competitive bidding process with the City of Boise earlier this year. According to a records request submitted by BoiseDev, the company beat out four other firms for the project.

Boise Mayor Lauren McLean said the proposal stood out. A city scoring committee ranked it nearly 15% higher than the next closest proposal.

“My sense in talking to housing team, it stood out because of the design and the number of units and certainty in financing,” McLean said. “The ability to finance was a big part of our interest in seeing a complete RFP.”

Aiming for a market gap

Jake Wood with J. Fisher Companies said as they went through the potential for the Boise market and the site, they believe they identified a gap that they hope the Franklin and Orchard project will address.

They hope to rent most of the units for residents who make about 60% of the area median income.

As BoiseDev previously reported, the project would include at least 210 units in a series of buildings that would mostly sit along Franklin and Orchard. A series of walk-up units would line the north side of Franklin Park. Another building, which J. Fisher calls a “razor,” would feature a set of small micro-units.

The Franklin and Orchard site – once home to the historic Franklin School until the Boise School District demolished the building – sits along two major coridoors in Boise. It also includes a public park that the city carved out of the school’s former playground and field.

Greg Walker, who works with J. Fisher on project design, said they wanted to start from the park.

“We really started from the place of how do we design a project that complements the park and supports the park – and not the other way around, Wood said. “We didn’t want the park to just become an amenity for our project.”

“How do we make this project amplify the park and make it better?,” Walker said. “We put a cafe here, and it faces toward the park and spills out to the park.”

The project site becomes taller and more dense as it steps away from the park and toward Franklin and Orchard. The project also got shorter.

“We have four building typologies,” Wood said. “We started with a six-story concept and through conversation with the city we are now down to four-story and I think people are going to be more happy with that.”

Other design features include mixing function with amenities.

“There’s this interactive stair area for sunbathing or hanging out or whatever it is, as well as an outdoor amenity space that’s sitting off of the cafe,” Walker said. “People can come up into this space and are welcomed into the park as part of this process.”

A food truck lot sits on the western side of the site, with a stage on the east. When combined with the staircase along the north, Walker hopes to create energy.

“It creates a powerful triangle, food trucks, cafe, interactive stairs and it focuses down into the park,” he said.

“We really focused on the corner,” Wood said.

That part of the site – which once would have housed a Maverik convenience store before the chain decided to sell the property, could include small retail businesses.

They also hope to include smaller offices spaces along Franklin Rd., as well as additional retail opportunities. They hope the interactive staircase that sits across Franklin from the existing Fred Meyer will help from keeping the buildings a ‘monolith.’

“As people are driving past, we made sure to make sure the residences are engaged here, and then there’s a big point of interest (the staircase) along the middle,” Walker said.

“We have 6,000 and 9,000 square feet of the commercial space,” Wood said. “We hope to rent to local groups and community-focused groups in Boise. We’ll offer small spaces of 1,000 square feet or smaller and keep the pricepoint low.”

He said for retail they hope to attract businesses like a barber shop or small cafes.

“There’s nothing worse than living in an apartment project and there’s nothing but cars,” Wood said. “We worked really hard to put together this raised plaza project that acts as a carport.  It’s almost like a boardwalk experience. You start to see how it operates and spills down into the park. “

The parking sits at ground level, with a plaza above it. The stairs feature connects to it both on the Franklin Rd. side as well as the park side.

“These (areas) cover parking, but they allow people to get over to the food truck area, and come up from the lobby spaces and spill down out into the park,” Walker said.

It’s a question many folks ask after a new project proposal pops up: why so much brown?

“Yes, what we are looking at is a brown box – that’s where we are in the design process,” he said. “We have built a lot of these and we’ve never built a brown box – we work with the city and the neighborhood and Greg and we do an organic development process to get us where we need to be.”

He said the project should look significantly a year from now as it progresses.

Child run over after falling from pickup truck in Osceola

Face coverings required if you want to enter a New Jersey...