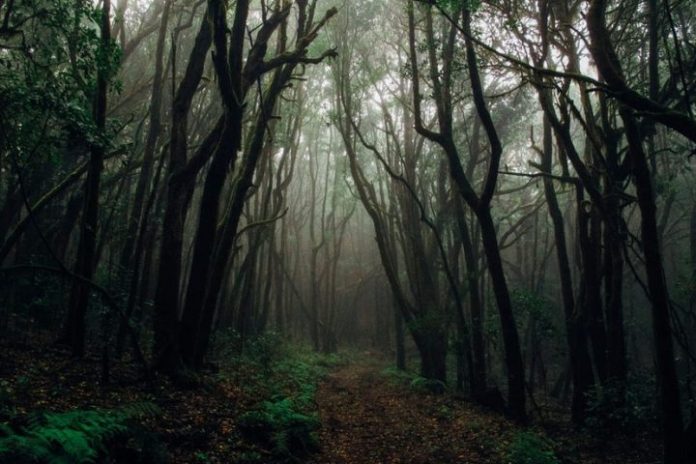 I had fallen asleep on the couch and was enjoying a pleasant dream. I was just a boy, running through the woods of western Pennsylvania, high above the magnificent Ohio River. And my beloved dog, Jenny, was leading the way.

Suddenly there was pandemonium. The black water-spaniel began barking incessantly. And then I heard a familiar voice yelling at the dog to hush. It took a few seconds to realize that my wife Jaye was shouting at our dog, Punkin, out on the deck.

I sat up and cussed under my breath. (I have sleep apnea and need any sleep I can get!) The time was around 11:30pm. I hauled myself out of the couch and headed to the deck. The cacophony of yelling and barking had reached a frantic pitch. I was angry at them both, and thought Punky was riled by a trespassing Abert squirrel or a roving deer.

But then, a ghostly figure appeared out of the darkness – heading our way. It was a female in long flowing clothes with a flashlight, braving the cold night air. At first I thought I was still dreaming, but as she got into the lighted yard, I recognized her as our next door neighbor, Pamela. The dog settled down a bit. She explained tearfully that her twelve-year-old daughter, Alena, had run away. You could hear the emotion in her voice as she confessed that she and her husband had decided to divorce. Earlier that evening Pamela had told her lovely daughter the bad news. Evidently it was not taken well.

I told her I’d help her find Alena, and not to worry. Somehow I could identify with this young girl who had just received such bad news. And I knew that Pamela did have good cause to worry…

Pamela thought that she probably headed to the woods in the back of our properties. I immediately thought about the cliff below our lower land. After checking the shop and my truck interior, I squeezed into my wife’s little two-seater and headed down to the cabin at the end of our side road. My flashlight reflected off several sets of amber eyeballs in the scrub oak, but no sign of the girl. In just a little while, there were others in cars ‒ and on foot ‒ taking up the search for poor Alena.

Soon several sheriff’s deputies arrived and put the search in high gear. At this time I felt that all I could do was to turn on all outside lights and to alert my brother in his home across the road. At 12:30am, my wife, yappy dog and I got into bed. Before I could close my eyes, I heard someone knocking at the back door. It was two deputies with questions about my shop and the woods down the hill. They gave me a business card and rejoined the search. I fretted about the girl and fell into restless sleep.

In the morning, I saw Pamela next door. She was on the phone but acknowledged me. She said she was talking to her lawyer and I assumed it was her divorce lawyer. She put her hand over the mouthpiece and exclaimed that they had found Alena at 4:30 in the morning! Pamela claimed her little girl had lost her way in the darkness. I expressed my relief that it turned out well in the end. But I knew it was only the beginning of a long, drawn out affair with Alena caught in the middle.

I can empathize with this young girl and the anger and sadness she is feeling. This is a major, life-changing event that will remain with her forever.

When I was a boy of twelve — the same age as Alena — I was given some similar life-changing news. One mournful day, we were at the dining room table when my father announced that my family and I were moving to Dallas, Texas. I was shocked and angry, sad and confused. My younger brothers and I were about to abandon our home in Pennsylvania for parts unknown, leaving behind our grandparents, aunts, uncles, cousins and all our friends. I ran out the door and through the woods, finally stopping high above our little town. I laid down in a patch of ferns and wept. Through my tears I watched the barges on the Ohio River slowly churning downstream to other parts unknown.

In a few days I got used to the fact that we were moving. I thought of the great adventure that laid ahead and even became excited about the move. The one thing that troubled me the most was “divorcing” my dear grandparents and extended family ‒ and the idea of seldom seeing them again.

But, at the very least, all of my emotional upheaval was not in the midst of a scary pandemic.

Let’s pray that Alena can find peace of mind soon.

People Believe These Myths About Pickup Trucks… And It’s Ridiculous

Grille Guards Market Study for 2020 to 2026 Providing Information on...