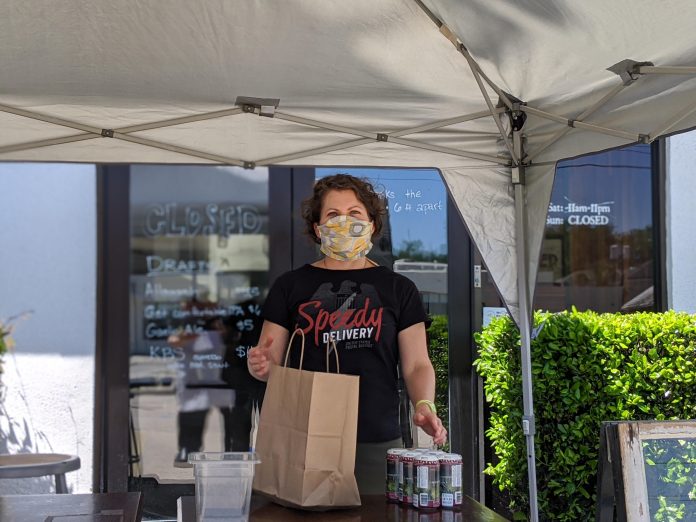 A few weeks ago, my wife prudently placed an Omaha Steaks order, anticipating both the cessation of our weekend trips to the supermarkets and the looming shortage of meat that we all are now hearing and reading about.

Last Saturday, I made a few sesame seed sea salt burger buns and fired up my wee Weber Smokey Joe so that we could have our first burgers in quarantine, accompanied by broccoli slaw and bagged chips. The best part was the bun, followed at some distance by the slaw.

Grilling a burger in your backyard is great, but why would I bother with the charcoal and the chimney starter when we can bike to Green Truck Pub in four minutes?

I know that my wife and I are far from alone in our longing for a Green Truck Classic topped with pimento cheese and a side of those fantastic fries. Whenever this scourge breaks and the Thomas Square neighborhood institution reopens for whatever ‘regular’ business then looks like, we will queue up with everyone else, six feet apart.

Since shutting down all regular restaurant operations on April 5, their hourly employees having been furloughed out of necessity, owners Josh Yates and Whitney Shephard Yates and General Manager Josh Heintz have pulled off a few low-profile pop-ups.

“It kind of achieved two things,” said Yates in a recent phone interview. “We had a bunch of inventory, some of it perishable, so we put together limited menus [for] preorder pay-ahead and just pick up at a certain time. That way, we could control the volume so that just the three of us could handle that.”

At the risk of burying the lead, using up perishable produce and in-hand inventory was only the bottom bun of these pop-ups. More on the pragmatic beneficence in a bit.

Without an extant system to handle high-volume take-away traffic, orders for these four events were collated by Whitney Shephard Yates, just one of the many great reasons the couple took this last week off.

On April 7, DIY burger kits with uncooked patty packs and pimento cheese by the pound were available, as well as half-price beer six packs. The following week was essentially an effort to sell beer and wine and side-item sundries, which was also a success.

“We had people bring growlers, we sold draft beer, and I’ve kind of killed all of my kegs,” said Yates.

The third pop-up featured a limited menu of meatball subs and veggie Reubens, already cooked and prepared in batches as customers came to pick them up.

Ambitiously, the fourth food foray went back to what Green Truck does better than anyone.

“We bought potatoes and cut fries and did cheeseburgers,” said Yates, and that day, the trio prepared a limited number of pick-up orders, a hundred or thereabouts.

“That was the one that was exhausting,” he added with the laugh of a chef on the other side of the burger pop-up. “We took on a little too much that time, but it was good to work with some of our suppliers,” namely local cooperating farms who have also been so sorely affected by area restaurant closures.

Use up perishables: check. Give a little business to local farmers: check.

“We had a lot of great support,” Yates said. “It was a great opportunity for us to try to go through our perishable inventory, manage our cash flow on money we had already spent and turn that into the cash that would help us pay that paid time off for the staff.”

Like many Savannah restaurants, Green Truck served its last pre-quarantine dine-in customers on March 18, and the Yateses and their team played those days right after The St. Patrick’s Day That Wasn’t by ear to see just what actually would happen.

April 4 saw the burger joint’s last day of offering only to-go service. Even before St. Patrick’s Day, they had implemented a half-capacity dining room, but financially, neither limited seating nor take-out only made sense for Green Truck.

“That wasn’t sustainable, and it was exhausting and wasn’t really worth the potential health and safety risks for our community and our staff,” Yates explained.

He recalled talking to the staff of 28 mostly full-time hourly-wage employees, asking them, “How are you guys feeling about this? Do you feel safe continuing to be here? Is it worth it?”

“Almost unanimously, everyone decided that it really wasn’t worth it,” he said.

He explained that when they closed the dining room and tried to-go only, well ahead of any official mandate, they effectively had to reconfigure the entire business, the matter faced by every eatery to meet this exigency.

“We were pivoting so many times, it was making us dizzy,” Yates admitted, adding that they were working two or three times as hard perhaps to break even on any given Sunday.

Knowing that the unemployment system was going to be more and more overwhelmed, not to mention the possibly protracted delivery of the stimulus funds, Yates told his staff that they would receive “paid time off,” at least until they were securely in the unemployment ranks.

“We had ordered all of this stuff for St. Pat’s and wanted to see if we could sell any of it,” he said, knowing that whatever money was brought in through pop-up events could be used to pay his employees in the interim.

In the pandemic, daily life is about looking out for others, and the Yateses care of their people makes me love Green Truck even more.

“We all want to be back open,” Josh Yates said, the hope clear in his voice. “I would love for things to get back to normal, but I am also dreading what it looks like when we do.”

“I don’t know what the ‘new normal’ is going to look like,” he admitted, echoing the sentiment of everyone in the hospitality industry that is Savannah’s lifeblood. “I wish it would get back to the ‘old normal’, which is what we knew and what we’re familiar with.”

“We’re waiting and seeing,” Yates added about the prospect of reopening. “There’s a lot of noise out there. To me, it seems too early, considering that, from everything I can gather, cases are still on the rise. And most of the rest of the Savannah community feels the same way by the look of it.”

“I don’t want to go to all this trouble and open up now to find out in August that we get locked down again.”

The good news for the Yateses is that “things are progressing pretty steadily” up the street at Green Truck’s soon-to-be sister pizza place, where Heintz will become ‘pizza maestro’ when it opens.

The construction crews working at 1201 Habersham have not slowed down too much, though they have been taking proper precautions, including having only a few people working at any one time.

“Things are happening down there,” said Yates, “which is good and sometimes fills me with a little dread, as well, because I don’t know what the future holds for the restaurant industry. It’s making things a lot more uncertain with this big big project we have coming up.”

If there is a Burger God, we will all be able to shed the masks and properly chomp into a Green Truck patty come October 12 to celebrate its tenth anniversary.

The next day, a pizza chaser up the street.

Truck driver accused of trying to dump poo outside the premier’s...