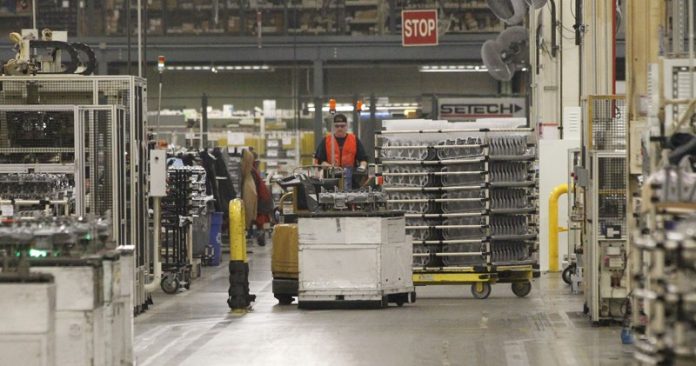 A select group of DMAX workers will return to their jobs Monday for the first shift, a General Motors spokesman confirmed Sunday.

DMAX, a producer of diesel truck engines in Moraine, is among a trio of General Motors plants planning to restart production Monday.

“The DMAX employees will begin to return to work tomorrow,” GM spokesman Dan Flores said Sunday. “Employees who need to return have been notified via normal communication channels.”

Once arriving at the plant, employees will have to go through our safety protocols and then complete a comprehensive safety orientation before production resumes, Flores added.

“Flint Assembly will resume production next Monday, 5/18 on one shift,” Flores also said. “As you probably know, DMAX engines largely go to Flint Assembly for our heavy duty Silverado and Sierra pickups.”

An employee at the Moraine plant said a “select group” of workers will work the first shift there Monday.

Asked about a number of returning workers, Flores said: “Don’t know how many but I don’t think it’s the entire workforce. This will be a gradual, cadenced restart with a focus on the safety of the world force.”

In coming weeks, DMAX will ramp up as needed to support the assembly plants, he added.

Two other plants that support vehicle assembly are also slated to start back Monday, according to the Detroit Free Press: A components operation in Lockport, N.Y., which makes radiators, condensers, heater cores, HVAC assemblies and oil coolers. And the St. Catharines Propulsion plant in Ontario, Canada, a plant that produces engines and a transmission for various vehicles.

The DMAX plant on Dryden Road sends diesel engines to a GM plant in Flint, Mich., where the engines are to be built into the new Chevrolet Silverado and GMC Sierra HDs (heavy-duty) trucks.

GM has been targeting May 18 as a general restart date for a variety of facilities.

PREVIOUSLY: Ohio allows manufacturing May 4, but there’s no start date for DMAX

“Considerable planning is underway to restart operations in North America,” GM said in its May 6 earnings report. “Based on conversations and collaboration with unions and government officials, GM is targeting to restart the majority of manufacturing operations on May 18 in the U.S. and Canada under extensive safety measures.”

GM says it has never ceased construction on a $175 million DMAX plant in Brookville, which will supply the older Moraine DMAX plant. The newest GM-DMAX plant will have more than 100 employees making components for Duramax diesel truck engines when construction is complete by the end of 2020, GM has said.

The new plant will operate concurrently with the original DMAX plant in Moraine, sending the older plant machined engine components for assembly.

Honda announced last week that it will gradually restart Ohio and other U.S. and Canadian plants beginning Monday. A Honda spokesman said Friday that all Ohio Honda employees will report in this week.

Mazda’s new BT-50 might be the prettiest pickup truck on road...