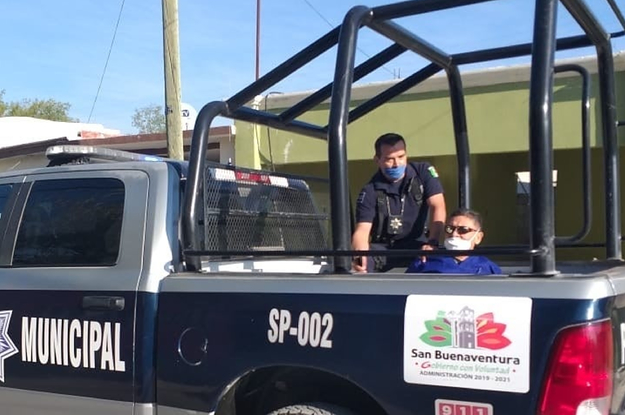 The journalists at BuzzFeed News are proud to bring you trustworthy and relevant reporting about the coronavirus. To help keep this news free, become a member and sign up for our newsletter, Outbreak Today.

MEXICO CITY — After another 12-hour shift, José Arturo Vera, an ER doctor in northern Mexico, was eager to get home. Six his colleagues were down with COVID-19 and he was exhausted.

But when Vera got to the police roadblock at the entrance to his town in Monclova, in Coahuila State, on April 16, an officer asked him where he was coming from. When Vera told her he was a doctor, she said he needed to turn around. But a soldier standing nearby waved him through and Vera drove the rest of the way home.

Shortly after, a patrol car pulled up at Vera’s driveway and the officers inside started taking photographs of his house. Vera was furious and started taking pictures of the cops in response. One of them slapped his phone out of his hand and another, said Vera, threw him against the car and hit him on his shoulders, arms and knees. A scuffle ensued while Vera’s children and his neighbors begged the cops to stop.

It was of no use. The officers handcuffed Vera, who was still wearing his scrubs, and drove him to the station on the back of their truck.

“They treated me like a criminal,” Vera told BuzzFeed News, who was released from the police station after an hour.

Whereas in the US, Spain and Italy, some of the hardest hit countries by the pandemic, people have rallied around medical staff, banging pots and pans in tribute, dozens of hospital workers in Mexico have become targets of discrimination and abuse from strangers and authorities who fear they are spreading the novel coronavirus.

“It hurts to talk about what is being done to our people,” Fabiana Zepeda, head of nursing for the Mexican Social Security Institute (IMSS), said during a press conference on Monday, her voice breaking. “We aren’t carriers walking around in public, and we’re not going to get anyone sick.”

The attacks on health workers come as the federal government is trying to recruit retired doctors and nurses to rejoin the workforce. On Tuesday, health authorities announced the country had entered “phase three” of the pandemic, in which the rate of contagion is expected to grow rapidly.

As a result of his injuries during his detention last week, Vera hasn’t been able to work. He has filed a report with the Coahuila State Human Rights Commission.

These days, Vera keeps busy putting together the paperwork he needs to get temporary disability benefits. He thinks it will be another week before he can get back to his job.

At least 21 nurses across Mexico have been verbally or physically assaulted since the coronavirus pandemic began, according to the IMSS.

One of them, Blanca Imelda, was walking home from the hospital in the city of Culiacán, in Sinaloa State, last month when a young man threw a bag filled with bleach and water at her.

Imelda, who works in the emergency room for $560 a month, couldn’t see her attacker; she only felt the cold liquid in her ear and on her face. She was left temporarily blind.

“You come from breaking your back at work only to suffer humiliation,” Imelda, 58, told BuzzFeed News. She said her bosses suggested she quarantine at home since she has high blood pressure, but she refused. “I will be here until the end.”

Several days later, another nurse, Sandra Alemán, was walking out of a convenience store in San Luis Potosi State, in central Mexico, when she heard a couple of kids in a parked car yell at her, “Covid! Don’t come close!”

After she asked them to stop being disrespectful, Alemán said the children’s mother ran up to her and slapped her. The two tumbled to the ground, and Alemán fractured several fingers. She wasn’t able to work for several weeks.

Earlier this month, Mexico’s Deputy Health Minister, Hugo López-Gatell, said there was no plan to deploy the National Guard to protect medical staff despite these attacks. But just a couple of days later, 1,600 members of the National Guard were deployed to safeguard hospital entrances across the country in order to keep “workers, patients and their families” safe, according to the IMSS.

It’s not only random attacks. Medical staff say they are getting hit from all sides, with many complaining that they have not received any personal protection equipment from the state. They worry about their exposure to the highly contagious virus.

Protests have broken out across Mexico, with nurses demanding protective gear on the streets and inside hospitals.

“Since this problem began, we haven’t gotten any material. What we have right now, we’ve bought ourselves,” said Catalina Guerrero, a nurse in a public hospital in Puebla State, 80 miles southeast of Mexico City, according to Imagen TV Mexico. In the clip, the nurses start leading the reporter to the director’s office, and on the way, a group of security guards is seen attacking the news stations’ cameraman.

Dozens of medical workers have been infected. In a public hospital in Monclova, the city where Gomez works, more than 40 staffers have tested positive for the coronavirus. A similar cluster emerged at another hospital in the State of Mexico, with

It is unclear how many IMSS staff are among the 10,544 confirmed cases reported by the Health Ministry. IMSS officials did not respond to a series of questions from BuzzFeed News.

Hospital staff had complained of shortages even before the coronavirus outbreak. After President Andrés Manuel López Obrador launched his austerity measures last year, Germán Martínez, the head of the IMSS, quit suddenly, citing the budget cuts.

Now, medical workers find themselves working with meagre supplies and in fear of being targeted on their way to and from work.

And it’s not only medical staff. Patients suspected of having been exposed with the coronavirus have also been subjected to abuse. Residents in a small town in Morelos State threatened to burn a hospital down if workers there agreed to treat people with COVID-19. According to the National Council to Prevent Discrimination, at least 159 people, including hospital workers, have reported being discriminated against for coronavirus-related reasons since March 19.

But there have been outbursts of support. In Reynosa, across the border from McAllen, Tx., a convoy of vehicles displaying white balloons paraded down a street recently in support of healthcare workers, according to Proceso magazine.

Still, hospital staff remain targets. Many doctors and nurses have stopped wearing their uniforms while commuting to work.

Vera, who has been working in the public healthcare system for the last 24 years, says he will wear “civilian clothes” when he returns to the hospital.

“We don’t deserve this,” he said. “What we deserve is moral support.”