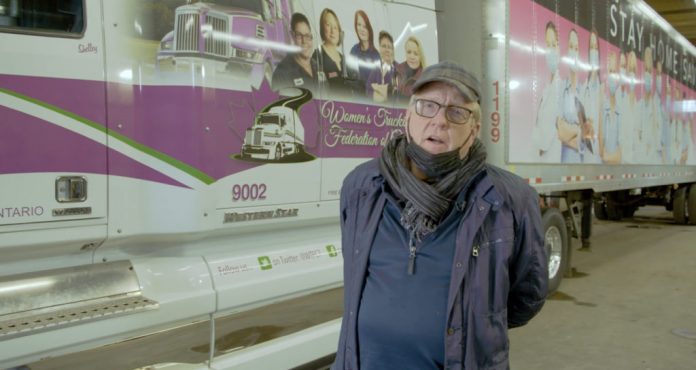 STRATFORD, Ont. – Documentary filmmakers typically embed themselves with their subjects, using the camera lens to offer insights into a different world. But Canadian director Craig Thompson faced another challenge as he focused on the work of longhaul truck drivers during Covid-19.

In the days of
social distancing, most of the filming had to be completed from afar.

“It’s an experiment in remote documentary filmmaking,” Thompson says of Haulin’ Hope, a project currently in the midst of post-production.

It’s his second film to be affected by the pandemic. The filming of Inside Wuhan, a 22-minute segment that originally aired on CTV’s W5, required a Canadian expat to smuggle a camera into Wuhan, China. The directions for filmmaking had to be completed through video chats.

This time his central “character” is Shelley Uvanile-Hesch, a truck driver with Ontario-based Sharp Transportation. And everything had to be planned in just four days, before she hooked up to a load of hand sanitizer destined for B.C.

“When the pandemic hit, I was looking for stories we might be able to turn into documentaries,” Thompson explains, noting why he acted on his longstanding idea about filming truck drivers. “Everybody is looking at people who haven’t been celebrated before in a new light.”

The new light
required plenty of cameras, too. No fewer than five cameras were mounted around
Uvanile-Hesch’s Western Star. Views were needed of her behind the wheel, the
road ahead, alongside the truck and to the rear. Drones were scheduled to shoot
the truck from overhead, and she was handed a camera of her own to capture
other footage.

“The challenge was not only working remotely but with people you’ve never met before. You don’t know their work, you don’t know their style, don’t know their diligence. And you’re working with them over the phone and through email in a medium that usually requires a hands-on approach,” says editor Julian Wierzbicki, who was responsible for technical aspects of the work. “It requires a big leap of faith.”

“We were familiar with the technology, but we did have more hiccups than we expected, and there was no time to address those issues. We didn’t have a second chance,” he adds. “We don’t know what’s going to happen in our industry in the future, but we do know that this type of remote production will be utilized to a greater degree moving forward.”

In open
spaces, crews were able to film other participants from a safe distance, such
as Sharp Transportation owner Shawn Baird, and other truck drivers Uvanile-Hesch
encountered along the way. Thompson was particularly taken by the story of one
driver whose wife had returned to work as a nurse in a longterm care home, guaranteeing
they’d be apart during Covid-19.

The filming from
afar introduced new logistical challenges as well. Since media cards tend to
fill up quickly, local freelancers had to be hired to collect files from the
truck whenever Uvanile-Hesch stepped outside. Onboard electronics also
interfered with the remote control used to activate the cameras from time to
time.

“It’s the story about the people behind the wheel and the challenges they face.”

And sometimes Thompson
had to simply hope that the filming would work as planned.

“Normally when
you’re doing a documentary, you can see the shots as they happen,” he explains.
“The biggest challenge was not knowing what you were getting.”

Uvanile-Hesch admits that the process was a little intimidating
at first. The ability to turn the cameras on and off gave her some added
confidence, as did every bit of exposure to the filmmaking process itself.

“But I learned I’m not cut out to be an actress,” she
jokes, referring to the multiple takes that were required to capture simple
activities like climbing in and out of the truck.

Now that almost all the footage is in hand, Thompson and Wierzbicki are targeting a completion date in June.

It’s still unknown where this film will air, though. While most work comes after funding support is secured, the decisions are undeniably slower during the pandemic.

“Our industry
is in a bit of a shambles right now,” Thompson says. “We knew that we had to go
ahead and do this and wait for a commitment later.”

He pauses for
a moment when asked what he learned during the trucking project itself.