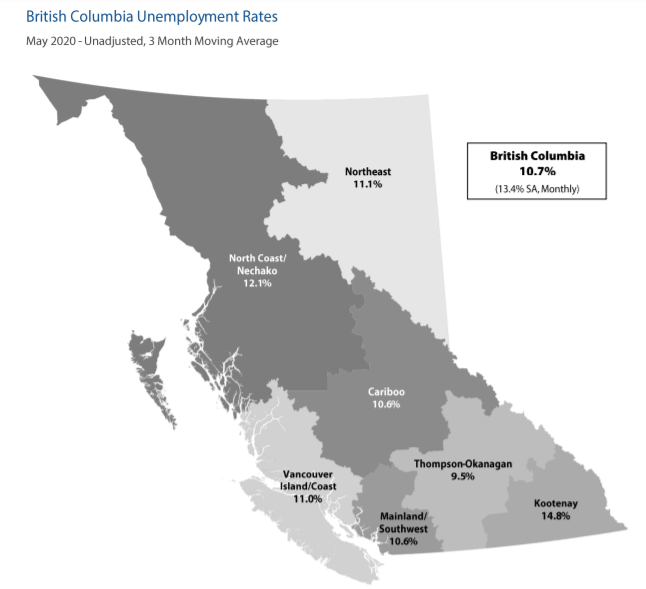 LANGLEY, B.C. – B.C. has done a good job containing the
Covid-19 outbreak, but that doesn’t mean it will escape lasting economic
fallout.

Ken Peacock, vice-president and chief economist of the Business
Council of B.C., gave members of the B.C. Trucking Association an economic update
June 11, dousing any hope of a speedy recovery. Peacock said he believes
non-essential travel will remain restricted through the end of the year, that a
vaccine will take at least 18 months to develop, that businesses will fail as
government stimulus runs out, and that many temporary layoffs will become
permanent.

On the other hand, trends that were already emerging – such as
telecommuting and increasing e-commerce – have accelerated and will be here to stay,
Peacock predicted.

He characterized the recession as “deep” and “nasty” and
warned things could turn for the worse when federal spending runs out.

“The government doesn’t have enough resources to make
everyone whole,” he said. “Extraordinary efforts have been taken but at some
stage when those payments stop flowing, businesses will fail and the government
has to understand it absolutely cannot save and protect all entities in this
downturn.”

Peacock said the global economy is headed into a steep
recession, citing Organisation for Economic Co-operation and Development (OECD)
numbers that predict all its member nation economies will contract in 2020. The
recovery will be slow, Peacock warned, adding this recession is likely to be
much deeper and longer-lasting than the global financial crisis of 2008-2009.

Peacock said the global economy will contract 6% this year,
with Canada’s falling 8% – worse, if there’s a second wave of the Covid-19
outbreak. B.C.’s GDP is expected to fall 8% this year, and gain 5% in 2021, but
will still fall short of pre-Covid levels.

“A decade of job growth, evaporating in two short months,”
he said, adding “there is no historical precedent for this decline.”

One in four private sector employees were laid off in March and
April, with a small rebound in May. The younger demographic –workers between
the ages of 15 and 24 – have been hit the hardest, with employment falling 36%.
Provincial unemployment is expected to be 10% this year, and 8.5% in 2021,
compared to just 4.7% in 2019.

B.C.’s economy and its trucking industry are heavily reliant
on exports, which tumbled in February as China closed its economy. Peacock said
it could be 2021 before exports recover. The province has set aside $1.5
billion for an economic recovery fund, but how it will be spent remains
unknown.

“If things turn out to be a little weaker and a weaker growth scenario unfolds, it could take two, three, or four years to regain our lost output.”

The hit to B.C.’s economic output will total about $20
billion, and gains in 2021 will only recover about half of that.

“Even though 4.8-5% (GDP growth) sounds great in 2021, it
only gets us halfway back,” Peacock said. “It’s going to take another year of
3% growth to get us back. If things turn out to be a little weaker and a weaker
growth scenario unfolds, it could take two, three, or four years to regain our
lost output.”

In addition to an increase in telecommuting and e-commerce, other lasting effects may include shortening the supply chain and repatriating some manufacturing activity back to North America, and the reshaping of the retail landscape. Peacock pointed to Starbucks, which just announced it will close more than 200 stores in Canada.

“It’s just an example of many other companies that will do
similar things,” he said.

One Biscuit, a Billion Stories