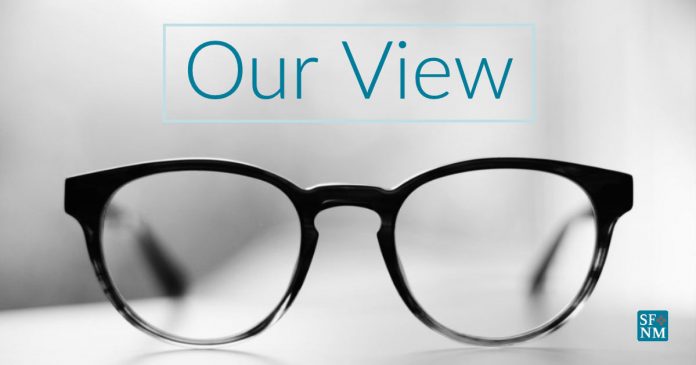 The Santa Fe County Commission’s recent approval of a Dollar General in the face of fierce opposition by residents of Eldorado has several lessons on wanting to stop out-of-place development in the future.

Depending on your point of view, these stores bring needed goods to residents far from larger stores or blight the countryside with ugly buildings full of plastic junk and processed food.

Santa Fe County land-use officials seemed to believe the store project meets all codes for a designated commercial area along the east side of U.S. 285 just south of Interstate 25. The Planning Commission, however, turned down the project, overturning a green light from county staff. That decision shows the county likely had more wiggle room to say no than the 4-1 vote by commissioners indicates. Ed Moreno, who represents District 5 where Eldorado is located, voted no. Good for him.

What is troubling about the vote is that the discussion was secretive. Commissioners went behind closed doors before emerging to take their vote on the Dollar General. The explanation by the county attorney is that this is an “adjudicatory” matter, which is exempt from having to be held in the open.

Having sat through hours of comments on similar controversial projects — the proposed gravel pit near La Bajada and the Pilot Flying J truck stop come to mind — we remember commissions that at least listened to public comment before voting.

The 2018 meeting to consider the Pilot Flying J truck stop attracted more than 300 people — before the coronavirus pandemic, obviously — and included six hours of public comment.

Commissioners similarly discussed their decision in closed session, but at least they heard people first.

That vote on the truck stop is instructive for how zoning ordinances can be used constructively.

Commissioners approved the developer’s conceptual plan, as apparently county code required. But they then struck out portions of the proposal that would have made the truck stop functional. They made the code work for Santa Fe residents.

It is telling, too, that staff believed the gravel pit was allowable, the truck stop was permissible, and that rural Eldorado is the perfect place for a dollar store. Does the code need rewriting? Do staff members need to do a better job interpreting it? Why so many green lights on projects that don’t seem right for Santa Fe County?

In the case of the Dollar General proposal, there is concern about traffic because of its location, the nature of those stores’ appearances and how it would fit with rural Eldorado. Dollar Generals are not known for their architectural beauty.

Nationally, they have been associated with increased crime and can be abandoned and left vacant.

Now that it’s approved, residents will have to back up their 1,900 petition signatures opposing Dollar General by choosing to shop in stores that suit their values. Their commissioners did not hear their concerns, and despite vows of electoral payback, terms on the county commission are limited. Two terms and done, unless, like Moreno, a commissioner chooses not to run for reelection.

Still, the Dollar General debate — even after the store is built — should not go away. It raises important questions about zoning ordinances, their enforcement and the ability of residents to affect their environment. Commissioners believed they had little choice but to approve. The question is, why?

Study: This is the 8th best place to be a teacher in the country | Times Leader

Carriers stepping up for drivers, customers, and staff during Covid-19 crisis