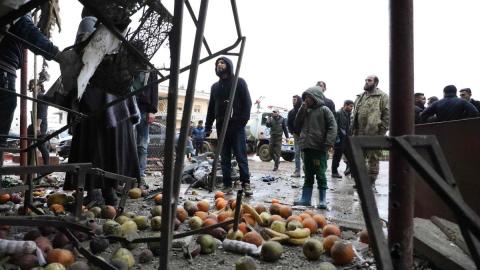 “At least 36 people including civilians were killed and 40 others wounded when an explosive device inside a fuel truck exploded in a market” in Afrin, said Rami Abdul Rahman, the head of the Britain-based Syrian Observatory for Human Rights.

He said the death toll could climb as some of the wounded were in critical condition.

Syrian activists said the blast burned several people to death, including some who were stuck inside their vehicles.

The blast set several cars and shops on fire and tanker trucks were used to fight the blaze.

It was not immediately clear who was behind the blast, one of the largest to rock Afrin since Turkish troops and allied opposition factions seized the region from Kurdish forces in March 2018 after a two-month air and ground offensive.

The Turkish defense ministry blamed Tuesday’s attack on the Kurdish People’s Protection Units (YPG) which it views as a “terrorist” offshoot of the outlawed Kurdistan Workers’ Party (PKK).

“The enemy of humanity PKK/YPG has once again targeted innocent civilians in Afrin,” the Turkish ministry said on Twitter.

The PKK has been waging a bloody insurgency in Turkey for three decades.

In January, at least seven people were killed in a car bomb in Azaz, another northern city held by pro-Turkey forces, according to the Observatory, which relies on a network of sources inside Syria.

The Syrian conflict has killed more than 380,000 people since 2011 and forced more than half of the country’s pre-war population from their homes.

Alaskan grocer travels 14 hours by boat to feed his town