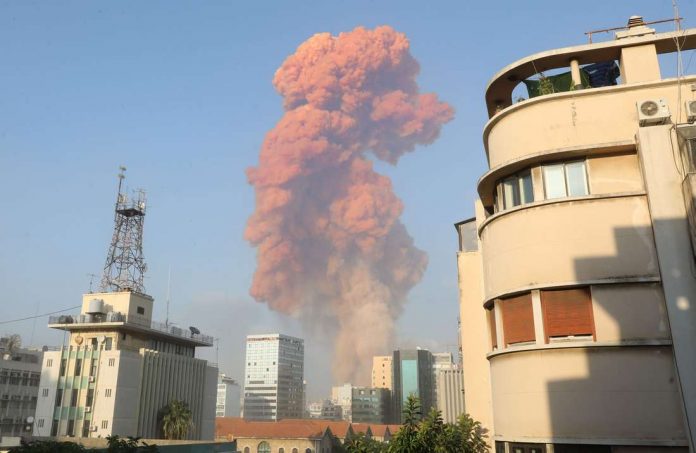 Video footage of the second blast showed an enormous orange fireball that dwarfed nearby buildings and sent a devastating tornado-like shockwave ripping through the city.

“We heard an explosion, then we saw the mushroom,” said one resident who witnessed the second, deafening explosion from her balcony in the city’s Mansourieh district.

“The force of the blast threw us backwards into the apartment,” she said.

Lebanese media carried images of people trapped under rubble, many bloodied, after the massive blasts, the cause of which was not immediately known.

A soldier at the port, who asked not to be named, told AFP: “It’s a catastrophe inside. There are corpses on the ground. Ambulances are still lifting the dead.”

Lebanese firefights extinguish fire at the scene of an explosion at the port in the capital Beirut on August 4, 2020. PHOTO | AFP

The official National News Agency confirmed deaths in the blast, without citing a number.

The explosions “caused dozens of injuries,” a security source said.

The AFP correspondent said every shop in the Hamra commercial district had sustained damage, with entire storefronts destroyed, windows shattered and many cars wrecked.

Injured people were walking in the street, while outside the Clemenceau Medical Centre, dozens of wounded people, many covered in blood, were rushing to be admitted to the centre, including children.

Destroyed cars had been abandoned in the street with their airbags inflated.

Lebanese firefights extinguish fire at the scene of an explosion at the port in the capital Beirut on August 4, 2020. PHOTO | AFP

A huge cloud of black smoke was engulfing the entire port area, as helicopters flew to dump water on the burning buildings.

The port zone was cordoned off by the security forces, allowing access only to a string of ambulances, fire trucks and people whose relatives were working inside the devastated area, while others were screaming to be let through.

A huge blaze was burning at the port, where ambulances were rushing away the wounded, their sirens wailing.

The blasts were heard as far away as Nicosia on the eastern Mediterranean island of Cyprus, 240 kilometres (150 miles) away.

Benjamin Strick, who works with investigations website Bellingcat, said on Twitter that the explosions appeared to have been centred on a 130 metre grey warehouse alongside a dock inside the port zone.

Video stills showed a intense blazing fireball rising higher than a line of towering storage silos, with a subsequent cloud towering into the sky.

“Buildings are shaking,” tweeted one resident, while another wrote: “An enormous, deafening explosion just engulfed Beirut. Heard it from miles away.”

The explosions hit Lebanon as it suffers its worst economic crisis in decades which has left nearly half of the population in poverty.

The country’s economy has collapsed in recent months, with the local currency plummeting against the dollar, businesses closing en masse and poverty soaring at the same alarming rate as unemployment.

The country’s worst crisis since the 1975-1990 civil war has sparked months of street demonstrations against the government.

Four alleged members of the Shiite Muslim movement Hezbollah are on trial in absentia at a court in the Netherlands over the huge Beirut bombing that killed Sunni billionaire Hariri and 21 other people.

A woman in the city centre Tuesday said: “It felt like an earthquake … I felt it was bigger than the explosion in the assassination of Rafic Hariri in 2005”.

Tensions have also been high with neighbouring Israel, after Israel said it thwarted an infiltration attempt by up to five Hezbollah gunmen, a claim denied by the Lebanon-based and Iran-backed group.