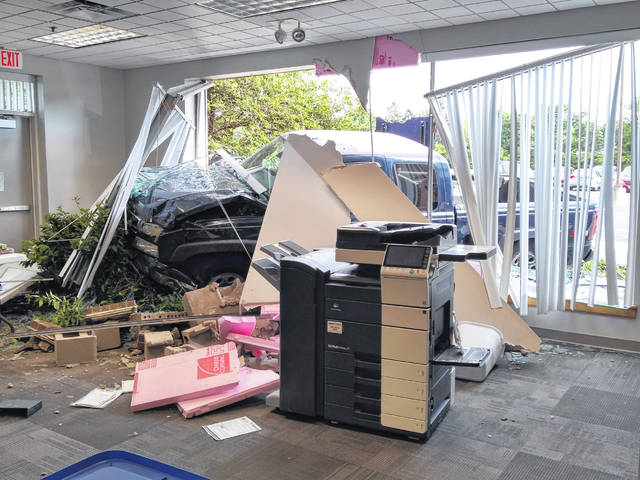 Emergency responders work at the scene of a crash Wednesday at approximately 5:30 p.m. A truck went through the window of the Champaign County Library. A staffer at the Champaign County Library took this photo showing damage caused Wednesday when a vehicle crashed through a window.

According to information from the Urbana Police Division, at approximately 5:30 p.m. on Wednesday a driver crashed a pickup truck into the conference room window of the Champaign County Library on Scioto Street.

Stanley Brann, age 58, of Urbana, was checked at the scene by Urbana Fire Division medics and denied any injury resulting from crashing his 2006 Chevrolet pickup into and through the meeting room window located on the front of the building. Police investigating the crash interviewed Brann and determined he was driving under the influence of alcohol.

Brann was arrested for driving while under the influence and issued a traffic citation for failure to control a motor vehicle. He will make his initial appearance on those charges in Champaign County Municipal Court on June 22 at 9 a.m.

Brann was transported from the crash site to the Urbana Police Division and was processed for the OVI crash. The crash investigation showed that Brann, headed eastbound on Scioto Street, drove the truck off the roadway, crossing oncoming traffic near the Rock’N Robin Diner parking lot, continued in a northeasterly direction of travel through the Chinese buffet restaurant parking lot. The truck then went airborne after crashing into a hill embankment on the east side of the parking lot, and continued through the library parking lot until it crashed through the window of the meeting room at the library.

According to library staff, some of them were gathered in the room when the crash occurred, but no one inside was injured. The library’s interior is currently closed to the public due to COVID-19 social distancing measures.

Building inspectors were called to the scene to check on the stability of the library structure. Brann’s truck suffered serious disabling damage and was towed from the scene. Police are awaiting final costs to the damage to the library, but it is believed to be extensive. Emergency responders work at the scene of a crash Wednesday at approximately 5:30 p.m. A truck went through the window of the Champaign County Library.

A staffer at the Champaign County Library took this photo showing damage caused Wednesday when a vehicle crashed through a window.

The mystery of the lost Seattle fire engine of Elliott Bay