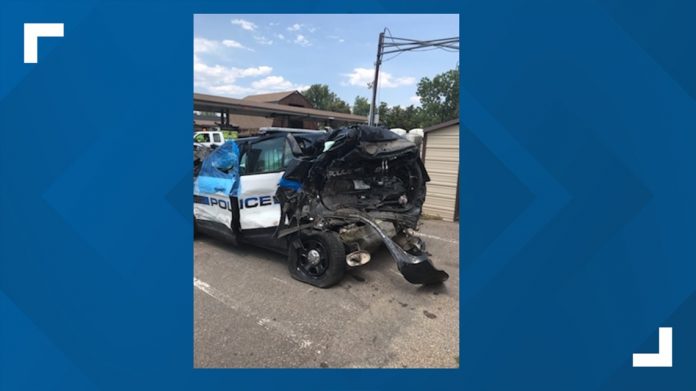 The driver narrowly missed a tow truck driver who was loading a disabled vehicle onto a truck, according to Wheat Ridge PD.

The crash, which happened just before 2 a.m. on Aug. 9, was captured by the body camera of an officer who was in the area of West 38th Avenue and Pierce Street investigating an earlier crash.

A patrol car was parked behind a tow truck. The tow truck driver was loading the disabled vehicle onto the truck when it was struck from behind by a pickup truck.

The officer was not in the car at the time of the collision and wasn’t injured, according to WRPD.

Body camera footage shows that the truck driver narrowly missed the tow truck driver who is standing in the intersection as the truck hit the patrol car. He escaped without injuries as well.

The driver of the car from the first crash was standing on the sidewalk and suffered minor injuries when the disabled vehicle was pushed onto the sidewalk.

RELATED: Suspect identified in hit-and-run that killed woman on sidewalk

Mathew Paul,44, who was driving the pickup, sustained minor injuries and was transported to an area hospital. Alcohol is suspected in the crash, according to WRPD.

Guebert: ‘Feeding you like family’ often requires a family

Is There a Record Fish in Lake Isabella? – Kern Valley...

What do we know about children and COVID-19? Maybe not enough...