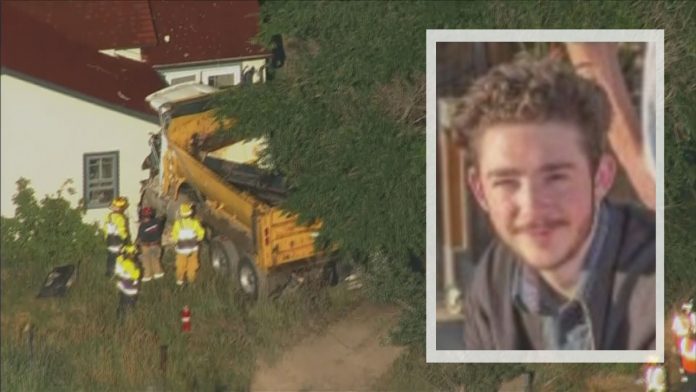 LONGMONT, Colo. (CBS4) — A 17-year-old boy was killed right outside his home Friday — in a crash with a dump truck. The dump truck then crashed into his house.

Andie Young works for them and remembers Kelsey fondly. The Skokans specialize in growing organic food and cooking farm to-table-meals at their two Boulder restaurants. “[Kelsey] had saved up his money and bought a 1973 GT and did some final fixes and touches with it last night,” Andie said.

Kelsey and his older brother decided to take their newly fixed-up ride for a test drive from their family home Friday.

“They were only accelerating, listening to the first gear, and that ride was over,” said Andie.

They collided with dump truck. The dump truck smashed the car and then crashed into the family home on the farm.

The Skokans have been hosting dinners from their farm in Boulder County to make money during the pandemic and were home when it happened.

Andie says they are devastated, but work on the farm has go on — and they have to keep going to keep their heads above water.

“We have a ton of food that’s growing. Every day something different is ready to be harvested,” said Andie.

The Black Cat Farms family is hoping now the community will step up and support the Skokans during this difficult time. Andie says people can order takeout from Bramble & Hare or Black Cat Farm and Bistro Provisions. They can also buy food from their farm stand at 51st and Jay Road, or book a farm-style meal reservation at their farm. There is also a GoFundMe set up for the family. “I really hope that this can be an opportunity to support a family that has devoted their life to serving Boulder in so many different ways,” Andie said.