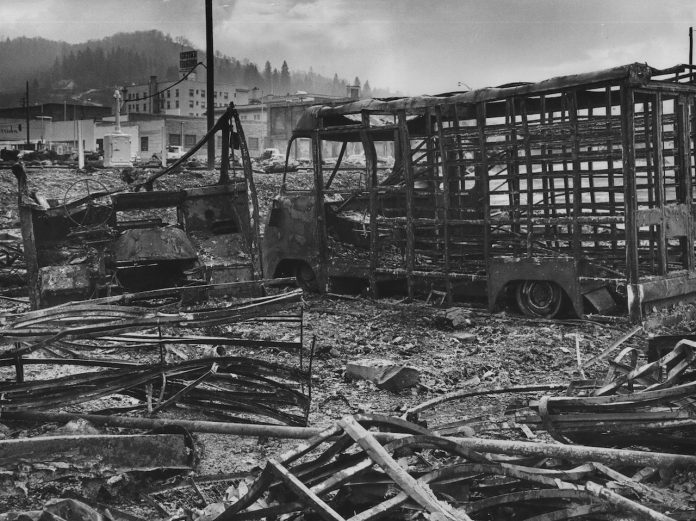 The horrific explosion in Beirut this week made legendary news photographer David Hume Kennerly think of his childhood in Roseburg.

“I was 12 years old and was watching from my open bedroom window as fire consumed a building supply store a few blocks away,” he wrote on Facebook. “I still vividly remember the huge explosion that followed. The concussion blew me across the room, broke every window in our house, and showered the neighborhood with burning wood.”

That explosion took place early in the morning on Aug. 7, 1959, when the small blaze at the Gerretsen Building Supply store sparked a load of dynamite, compounded from ammonium nitrate and oil, that was sitting in a parked truck. The truck’s driver was staying at a nearby hotel. When he learned of the fire in the store, he started to run to his vehicle, but he didn’t make it.

“Center of City Devastated by Shattering Dynamite Blast,” The Oregonian blared across the length of its front page the next day.

The blast damaged more than 300 businesses and outright destroyed 12 homes.

In the moments before the explosion, Roseburg police officer Sam Gosso had spotted “a little fire in some rubbish” next to the supply store and headed toward it, figuring he would need to direct traffic and discourage looky-loos.

“I no sooner stepped out of the car than I heard someone holler, ‘Get the hell out of here, that dynamite is going to blow!’” he later recalled. “The next thing I knew, I came to about 100 feet away. The blast had hurled me and the police car against a wall. It looked like an A-bomb. There was a towering ball of flame as high as I could see.”

The truck’s driver, George Rutherford, also survived the explosion. The police told reporters he couldn’t be interviewed because “he was in a state of shock bordering hysteria.”

The then-12-year-old Kennerly, who a dozen years later would win a Pulitzer Prize for a portfolio that included images from the Vietnam War, said he “escaped [the Roseburg explosion] unharmed, and it proved to be good training for my later career!”

He added of the tragedy in his hometown:

“It looked like nuclear detonation. … Fourteen people died in the disaster. The recent explosion in Beirut was caused by the same substance, 2,700 tons of it. That blast was over 700 times bigger than the Roseburg event. Hard to imagine.”

‘Now is not the time to cry over bread and butter...