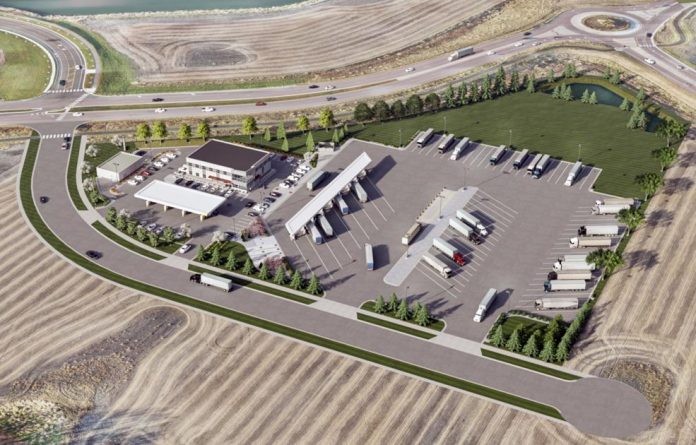 MANKATO — The good news for truckers is that a sprawling new truck stop, complete with a spacious lounge, has received final approval from the city of Mankato.

The good news for other drivers is the truck stop will also bring an upgrade to the intersection of Adams Street and Blue Earth County Road 12, which has been a no-left-turn source of annoyance for many motorists attempting to navigate the city’s far eastern side.

The 10-acre truck stop is being developed by the Trifecta Group, led by Steven Freyberg. A state study found the Mankato area has a shortage of places for over-the-road truckers to rest, and the new truck stop is to have 63 stalls for semi parking, eight diesel fueling stations and a truck scale. The project also includes a car wash and eight gas pumps for cars.

A two-story building has space for a 2,700-square-foot restaurant and a 3,100-square-foot convenience store on the first level. On the second story is 3,000-square-foot lounge with large windows overlooking the truck-parking area, plus four individual restrooms with showers, and a laundry area with a pair of washing machines and a pair of dryers.

Freyberg said there’s still much to do before construction begins, but requests for bids have gone out and the plan is for work to be underway this construction season.

Partly because of the documented need for more rest options for truckers in the area, the Minnesota Department of Employment and Economic Development awarded the city a $912,000 grant to help cover the cost of extending Adams Street eastward past County Road 12 to provide access to the development site. That project will cost $2.1 million in total, including intersection improvements and utility work, with much of the remaining expense to be covered by assessments paid by Trifecta Group and Turner Properties, which owns a large yet-to-be developed parcel across Adams Street to the south of the truck stop site.

Blue Earth County and city officials have agreed to upgrade the intersection, which currently prohibits left turns for eastbound traffic on Adams Street — something that has reportedly prompted frequent illegal turns by drivers looking for the quickest route to Highway 14. Right-turn and left-turn lanes will be added on all legs of the intersection with stop signs on Adams Street.

The City Council last week approved the annexation of the truck stop property, rezoning of the area, a conditional-use permit, the final plat for the development and the design of the building.

Everything You Need to Know About the Tesla Cybertruck