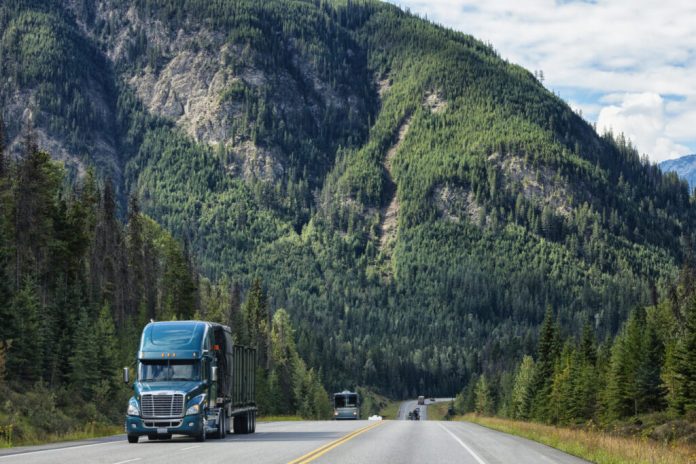 LANGLEY,
BC – Surveyed members of the BC Trucking Association (BCTA) are reporting a
29.8% drop in revenue due to Covid-19 – representing a further 9.3% drop since
March.

The
province’s largest trucking organization describes the trucking and motor coach
companies, and their suppliers, as severely strained by the ongoing pandemic.

While
essential supplies such as food, fuel and medical equipment continue to move,
there is less freight crossing the border or supporting Asia-Pacific trade, the
BCTA says. Empty miles are also a problem.

“In
these extraordinary times, we’re hard hit. The viability of the road
transportation industry and the economy always go hand in hand,” said Dave
Earle, president and CEO.

Large
numbers of heavy trucks and buses are parked, and the businesses that supply
new vehicles, parts, insurance and other services are reporting stresses of
their own.

Motor
coach operators among them have been particularly hard, reporting a 96.1% drop
in revenue.

“None of these numbers are good, but we’re especially concerned
about motor coach companies,” said Earle. “BC’s motor coach businesses have
been devastated by the shutdown of tourism, the cruise ship industry, ski hills
and parks, and headline concerts and entertainment events.”

Eighty-five percent of these surveyed businesses said they were
worried about their survival if current conditions continue for at least the
next three months. In contrast, 37% of motor carriers had such worries, as did
18% of associate members.

“Our
industry appreciates current federal and provincial government relief
measures,” Earle said, “but further action is required to ensure the protection
of BC’s supply chain in response to COVID-19 and its aftermath. We recommend
strategies like expanding provincial sales tax exemptions for equipment and
continued support for investment in clean technology. For motor coach
companies, an extension of the Canada Emergency Wage Subsidy could help motor
coach companies providing seasonal transportation survive, while we all adapt
to the ‘new normal’ in BC.”