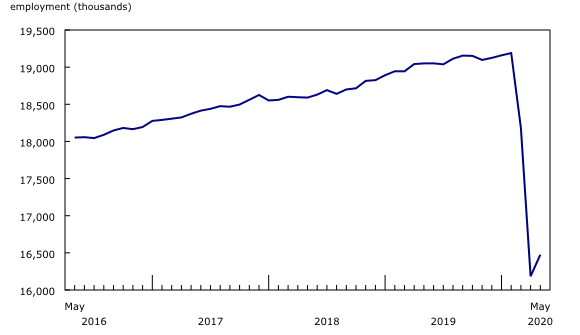 May employment numbers represented a recovery of 10.6% of Covid-19-related
employment losses and absences seen over the previous two months, according to
a Statistics Canada labor update June 5. However, the unemployment rate set a
new record high at 13.7%.

From February to April, the total number of unemployed Canadians
more than doubled. The employment picture, however, varied widely by sector and
province. Quebec accounted for nearly 80% of May’s employment gains, with
employment up 6.5%.

In Ontario, employment declined in May but at a slower pace.
It was the only province in which employment continued to fall in May, shedding
65,000 jobs compared to 689,000 in April.

Employed Canadians also reported being less concerned about
job security in May.

The jobs picture in the U.S. was even more upbeat. Total
non-farm payroll employment surged by 2.5 million in May, with unemployment
there dropping to 13.3% – a drop of 1.4% – according to the U.S. Bureau of
Labor Statistics.

However, employment in transportation and warehousing
dropped by 19,000, on the heels of an April decline of 553,000. Air
transportation lead the job losses, shedding 50,000 positions in May.
Employment among couriers and messengers climbed 12,000 in May.