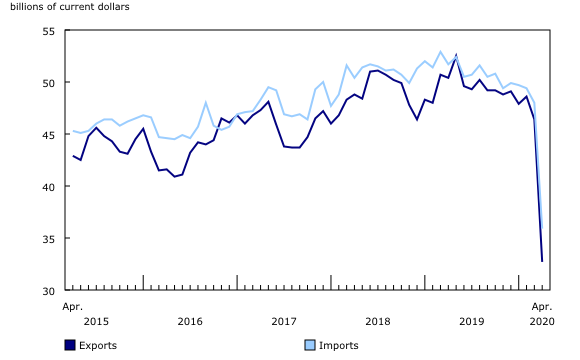 OTTAWA, Ont. – Canada’s exports fell to their lowest levels
in more than a decade, while imports plunged to levels not seen since 2011 in
April, according to new trade data from Statistics Canada.

The declines came as retail stores and manufacturing
industries shut down to manage the Covid-19 pandemic, coupled with falling
energy prices.

Exports in April were down 29.7% at $32.7 billion, while
imports fell 25.1% to $35.9 billion. Statistics Canada reported “monthly
decreases of this magnitude have never been observed.”

Motor vehicles and parts showed the largest decreases, StatsCan
reports, while total trade for these goods was already near a five-year low. Passenger
car and light truck exports dropped 84.8% due to production shutdowns, while exports
of engines and parts plunged 84%. Imports were also down 90% in this category.

Trade in energy products were down steeper than ever on
record, with crude oil exports down 55.1%.