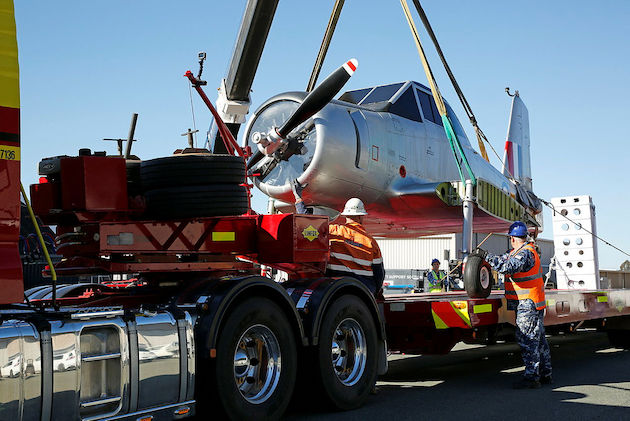 Mike Downs, Warrant Officer from the Amberley Static Aircraft branch, told Trailer Magazine he engaged Linfox via a defence contract to transport a Mirage A3-55 and a Winjeel Trainer A85-403 from RAAF Base Amberley to RAAF Townsville Aviation Heritage Centre.

The RAAF restorations were successfully delivered on Sunday 2 August. The convoy departed just after midnight on Friday 31 July.

“Brad Imber, Managing Director of Edge Heavy Logistics, was subcontracted by Linfox to coordinate the road convoy which took months of preparation,” said Downs. “Imber came to the base many times in the lead-up to the freight task and developed a custom cradle to support the main landing gear of the Mirage.”

Downs explained that the Mirage needed to be raised and tilted in-transit to appease height restriction requirements such as avoiding overhead powerlines. Also, due to the aircraft’s manufacture and structural integrity, the wings could not be removed otherwise it would destroy the jet.

Imber identified a number of logistical challenges in the initial quotation and feasibility review.

“I designed a frame to accommodate the Mirage complete with load riggers,” he said. “Also, the wingtips of the jet came too close to the ground, which is problematic when traversing briges and railway lines, so I developed a custom solution on the drop deck trailer. The payload was 8.2m wide and weighed about four tonnes.”

The Winjeel was transported with its wings removed.

One of the most difficult aspects of this freight task, according to Imber, was planning the route.

“The fleet, with a similar width to dump trucks, needed to find a route to get into Townsville,” he said – adding that there were three Police escorts for each leg of the three-day journey and with a little creative thinking the convoy had to travel for about 400m along the Bruce Highway in the opposite direction to manoeuvre into a specific street to successfully enter Townsville with the restorations in tow. “Along the way there many hills to climb but the last 30 minutes of the trip were a real highlight. The Townsville people were unbelievable and brought big crowds to show their support. The aircraft really did generate a lot of interest among the public. It was a fantastic experience and I was proud to be involved.”

“The aircraft we select for these displays represent connections to Townsville,” said Green.

“Mirage pilots typically honed their fighting skills here and this aircraft was seen flying during the 1960s, 70s and 80s.”

“The Winjeel on the other hand is a training aircraft – it’s also an indigenous word meaning young eagle. It’s an important symbol for the RAAF and the Townsville community. Every RAAF pilot learnt to fly in the Winjeel during its time in service. It was built and designed in Fishermans Bend, Victoria, and flew right up until 1994. It’s a capable little plane and also served a maritime role in the 1960s.”

Green said a PC-9 is also being set up for display in the museum.

The RAAF is preparing to celebrate its centenary year which will be 31 March 2021.

This 1974 Chevy Blazer Is Just Rubbing It In

One transported to hospital after Tuesday morning accident – Austin Daily...