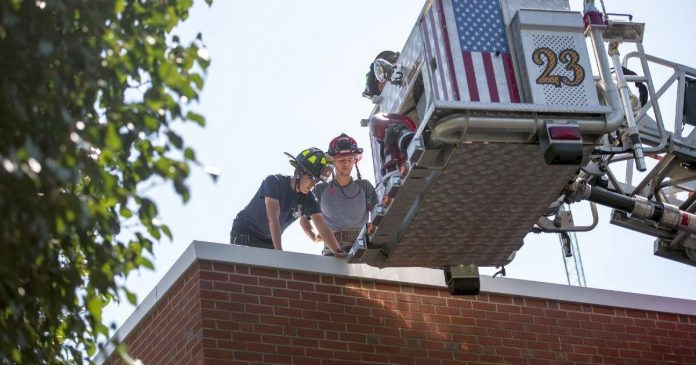 For the first time in the town’s history, Edinburgh has around-the-clock fire protection.

To make 24/7 services a reality, the town had to more than triple the fire department’s budget to $1.1 million this year — up from $300,000 in 2019 — hire an additional full-time firefighter, 35 paid stand-by firefighters and convert two office spaces to bedrooms at Fire Station No. 1.

Last year’s response time exceeded response guidelines set by the National Fire Protection Association (NFPA), which is nine minutes for a population of more than 1,000 in a square mile. There are nearly 4,600 residents in Edinburgh, which covers 3.1 square miles.

Despite industrial and residential growth the town has seen lately, Edinburgh Fire &amp; Rescue, for years, remained a small department with mostly on-call firefighters and emergency medical technicians who responded primarily from home.

In 2019, Edinburgh had only eight employees to serve the town of nearly 4,600: a full-time fire chief, two full-time firefighters and five paid stand-by firefighters. The small crew staffed the station during normal business hours on weekdays.

Expanding the fire department had been on the town’s radar for some time, and was placed on the town’s capital projects — or priorities — list in 2019, said JT Doane, town manager. The town worked last year to develop a plan, and hired then-Bargersville deputy fire chief Mike Herron as a consultant.

Herron, Doane and town council members came up with a plan they said would protect the town with as little budget impact as possible.

“It allows us to rest better,” Doane said. “Now, people in the community understand that there is always someone at the firehouse to provide that service. If they or a family need fire and EMS, they are now better able to get that at any time.”

After Herron helped the town reshape the department, he was appointed fire chief and has served in the role since January. Herron, of Hopewell, has been serving with Johnson County fire services since the late 1980s, when he first served as a volunteer for the Amity Fire Department. He served as Franklin’s fire chief from 2000 to 2006, and in various leadership roles at the Bargersville Community Fire Department between 2006 and 2019.

With his years of experience, it became clear to Herron that major changes were needed; most immediately a significant staffing increase.

The old department model hinged on the dedication of former fire chief Allen Smith, who had been on call 24/7 due to a lack of workforce, Doane said. It was because of his dedication that the department was able to protect residents with so few employees, he said. Smith retired at the end of 2019 after 45 years with the department.

A workforce of eight with employees working nonstop is not sustainable because it does not allow firefighters adequate time to rest between shifts, Herron said.

Responding from home drove response times up because crews had to report to the station first and wait for one or two others to arrive before they could report to the scene, he said. Two crew members are needed to take out an ambulance, and three are needed to staff a fire engine, Herron said.

The department now has a workforce of 44, including 40 paid stand-by firefighters, three full-time firefighters and Herron. Most, but not all, of the staff are also certified EMTs or paramedics.

With this level of staffing, between three and five employees are at the fire station at all times, allowing the department to deploy one or two response vehicles to every emergency, Herron said.

“We didn’t say, ‘Let’s start a career department and spend all this money.’ We did it out of necessity because we couldn’t sustain the all-volunteer model,” Herron said.

Whether a career, full-time firefighter or a paid stand-by, all firefighters are certified by the state and all are equipped to respond appropriately to emergencies, Herron said.

“We are all professional in our actions. It is really all about the benefits and the hourly rate. The difference is most of ours don’t get benefits,” he said.

Hourly pay versus a salary with benefits is the only difference between the two types of firefighters. The town’s paid stand-by firefighters earn $12 an hour for several shifts per week, depending on their availability, he said.

More work to be done

Aside from staffing levels, few other changes have been made at the department. But more work is needed, Herron said.

That includes providing better sleeping quarters for the now 24/7 department.

In the meantime, two office spaces at the firehouse were converted to bedrooms, where firefighters sleep in bunk beds during their day-long shifts. But there is just one bathroom for the three to five employees to use.

Edinburgh has two fire stations. The Walnut Street station is the department’s headquarters, and the Mary Drybread Court station serves as a training facility. The town is considering building or buying another station to facilitate further growth, but is not ready to announce any specific plans, Doane said.

Other needs include new rescue and ambulance apparatuses, Herron said.

Last week, the town finalized an agreement with the City of Franklin to buy the Franklin Fire Department’s old aerial fire truck, a 2003 model that Herron had purchased for the city when he was chief. The town paid Franklin $125,000 for the used truck and an SUV, whereas buying a new aerial truck would have cost more than $1.2 million.

Since the old truck was not deployed often, it is in good condition despite its age, Herron said. The truck, which has a 95-foot ladder and bucket, will bring more response capabilities to an area of the state that is lacking, he said.

While Edinburgh has two ambulances, they are only equipped for basic life support, meaning seriously ill or injured individuals have to wait for another department to arrive with equipment that is capable of providing more advanced care. The nearest ALS ambulances to Edinburgh are in Franklin and Columbus, Herron said.

Edinburgh is not alone in its need for an ALS ambulance. In fact, there is no ALS ambulance available at any southern Johnson County fire service, he said.

There are no immediate plans to purchase ALS equipment, but more firefighters are being trained as EMTs to staff existing ambulances, Herron said.